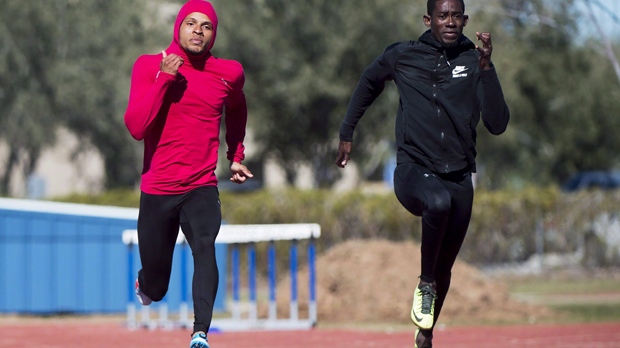 Canadian track athlete Andre De Grasse, left, and Hua Wilfried, of the Ivory Coast train at ALTIS, a world elite track and field training facility in Phoenix, Az., on February 2, 2016. Andre De Grasse is poised to begin his professional career, and he knows more than a few eyes will be watching.The 21-year-old sprint star from Markham, Ont., will make his season debut Saturday in the 60 metres at the prestigious Millrose Games, part of a scaled-down indoor track season for De Grasse on the heels of a ridiculously gruelling 2015 outdoor season. THE CANADIAN PRESS/Nathan Denette

The 22-year-old from Markham, Ont., who graduated from the University of Southern California last year, was at the premiere of the documentary "The Carter Effect" at the Toronto International Film Festival on Saturday.

"He (Carter) kind of motivated me to go back to school," De Grasse said. "I remember his whole story, he went back to school and finished his degree and then came to the playoff game. So he definitely is one of my inspirations to finish school and still continue with sport."

Carter infamously left the Raptors prior to Game 7 of the 2001 Eastern Conference semifinals against the Philadelphia 76ers to attend his graduation from North Carolina. He then flew on a private plane to Philadelphia and attempted the final shot of the game -- a 23-footer just before the buzzer that was a little too long -- as the Raptors fell 88-87.

Carter had finished his degree in African-American studies in the off-season. He wasn't able to attend the documentary's premiere due to a family illness.

Fresh off a silver and two bronze medals at the 2016 Rio Olympics, De Grasse returned to USC to complete his sociology degree, which fulfilled a promise he made to his mom Beverley. He had opted out of his final season of NCAA eligibility at USC to turn pro.

De Grasse graduated last December before returning to Phoenix to train. The Canadian had a disappointing finish to his 2017 track season after suffering a torn right hamstring that forced him to withdraw from the world championships in London.

De Grasse, whose first memory of Carter was when he won the 2000 NBA slam dunk contest, was joined at the documentary's premiere by NBA stars such as LeBron James of the Cleveland Cavaliers and former Raptor Chris Bosh.

"He was one of my inspirations growing up, definitely a role model for me to be in the NBA one day," De Grasse said. "As you know, went to track, the other way, but I mean, he's still inspirational to me."

The documentary is directed by Sean Menard of Hamilton and gives a look at Carter's impact on Canadian basketball and the Raptors when he joined the team in 1998. James is an executive producer.

Raptors president Masai Ujiri was on the red carpet at the Princess of Wales Theatre and called Carter a "legend."

"His life was dynamic just like his game I think and that has inspired a lot of us and inspires us in Canada and I say it again, his movement is just starting," Ujiri said. "We're very proud of him."