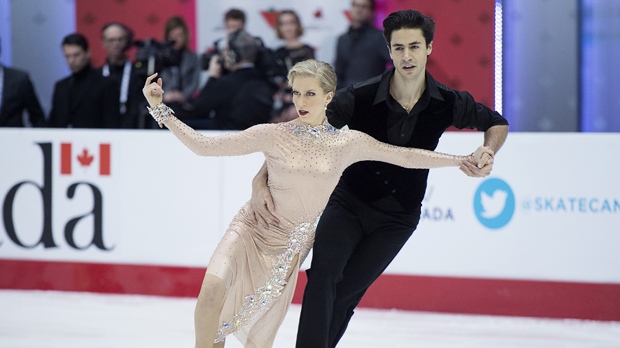 Kaitlyn Weaver and Andrew Poje skate the senior ice dance rhythm competition at the 2019 National Skating Championships at Harbour Station in Saint John, N.B. on Friday, Jan. 18, 2019. They are in first place after their program. THE CANADIAN PRESS/Andrew Vaughan

The duo from Waterloo, Ont., scored 213.78 points, which topped the previous Canadian championship best of 209.82 set by Olympic champions Tessa Virtue and Scott Moir last year. But the International Skating Union has changed the scoring this season, to allow for higher grades of execution.

Piper Gilles and Paul Poirier had the best free dance score of the night for their performance to “Vincent,” but it wasn't enough to pass Weaver and Poje. They finished second with 212.31 points.

Moore-Towers, from St. Catharines, Ont., and Marinaro, from Sarnia, Ont., led wire to wire to win with 202.75 points.

Moore-Towers and former partner Dylan Moscovitch won the national title in 2011, but the event had been dominated by two-time world champions Meagan Duhamel and Eric Radford ever since.

Duhamel and Radford retired after capturing gold in the team event and bronze in the pairs at the Pyeongchang Olympics.