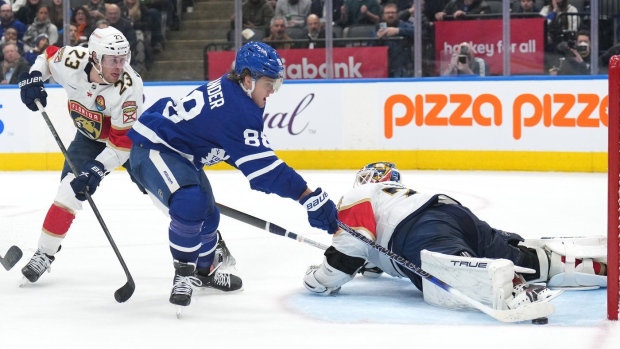 TORONTO - William Nylander scored his second goal of the night at 1:53 of overtime as the Toronto Maple Leafs defeated the Florida Panthers 5-4 on Tuesday.

Auston Matthews, Dryden Hunt and Alexander Kerfoot provided the rest of the offence for Toronto (27-11-7). Nylander added an assist for a three-point performance.

Matt Murray allowed four goals on eight shots before being replaced by Ilya Samsonov early in the second period. Samsonov finished with 11 saves.

Mitch Marner added two assists to set a franchise record by registering at least a point in 19 straight home games, passing Darryl Sittler's mark set in 1977-78. The Leafs' winger also has the longest home point streak in the NHL since Sidney Crosby's 19-game stretch in 2010-11.

Aleksander Barkov, with a goal and an assist, Carter Verhaeghe, Anton Lundell and Josh Mahura replied for Florida (21-20-5), which got 32 stops from Sergei Bobrovsky and was denied its first three-game winning streak of the season.

Nylander missed the net on a penalty shot with his team trailing 4-3 early in the third period, but scored his 23rd of the season at 5:59 when Marner's initial shot hit Bobrovsky's pad and caromed in off the Toronto forward.

He then buried the winner in the extra period, showing great patience on a terrific individual effort before sliding the puck past Bobrovsky.

Leading 3-2 after the first, the Panthers chased Murray on just their eighth shot on a power play 1:44 in the second when Barkov fired his 12th.

The feisty affair boiled over with four minutes left in the period when Nick Cousins went after Matthews with three straight cross-checks.

Toronto's power play - booed earlier in the period on a particularly rough sequence - connected a second time on seven chances right before the intermission to make it 4-3 when Matthews snapped his 22nd on Bobrovsky, who made 28 stops in Monday afternoon's 4-1 victory over Buffalo.

The Panthers, who started the day four points below the playoff cutline after winning last season's Presidents' Trophy, opened the scoring at 1:52 of the first when Verhaeghe ripped his 21st.

Coming off consecutive road losses to division rivals Detroit and Boston, the Leafs tied it 46 seconds later when Hunt tapped home his third.

Florida then got into penalty trouble, but jumped on a Toronto miscue with five forwards on a Leafs power play when Lindell scored his sixth on a rebound off a Barkov breakaway at 12:34 following a Marner miscue.

The Leafs got even again when Kerfoot shovelled home his seventh at 15:10 on a man advantage only to watch the visitors head to the intermission up one when Mahura blasted his fourth from a tough angle at 18:04.

The Leafs have been dealing with an illness in the locker room over the last week. Matthews sat out Thursday, while fellow forwards Bobby McMann and Pontus Holmberg missed Saturday. McMann returned to the lineup Tuesday, but Holmberg and defenceman Rasmus Sandin, who both were sidelined for Monday's practice, took part in the optional morning skate before the Florida game, but didn't dress. Toronto head coach Sheldon Keefe said Monday the team is “a lot better” at preventing illnesses from spreading the last few years thanks to lessons learned from COVID-19, but added “once it starts, it is hard to slow down ... it's that time of year.”

Verhaeghe was selected by the Leafs in the third round of the 2013 draft and didn't make his NHL debut until 2019 with Tampa Bay, but has found a home in South Florida. The 27-year-old Toronto native, who had 24 goals last season, scored for the 21st time in 2022-23 to give him 36 points in 45 games.

The Maple Leafs host the Winnipeg Jets on Thursday.