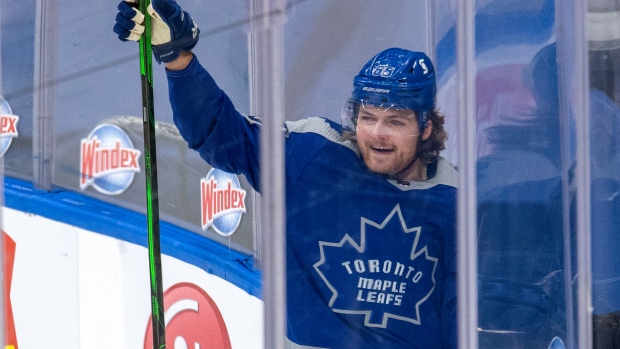 TORONTO - William Nylander scored his second goal of the night 1:06 into overtime as the North Division-leading Toronto Maple Leafs defeated the Calgary Flames 2-1 on Wednesday.

Michael Hutchinson stopped 21 shots for Toronto (15-4-2) in his second consecutive start in place of Frederik Andersen. The team's top netminder remains out with a lower-body ailment. Auston Matthews had two assists.

Andrew Mangiapane replied for Calgary (9-9-2), which had lost four of its last five in regulation before Monday's 3-0 victory at Scotiabank Arena. David Rittich made 37 saves in his second straight start in place of injured No. 1 goalie Jacob Markstrom, who's day-to-day with an upper-body injury.

Nylander took a pass from Matthews in the extra period and beat Rittich upstairs for his seventh of the season as the Leafs spilled over the boards to celebrate.

Mangiapane finally snapped a 0-0 tie with 3:27 left in the third period when he took a pass from Matthew Tkachuk behind the Toronto net and beat Hutchinson for his seventh goal of the season.

Rittich, who made 34 saves for his first victory of the season Monday, had made 70 straight stops against the Leafs, but Nylander jammed home his sixth with 1:28 remaining on the clock to tie it.

Next up for the Flames is four in a row against the Ottawa Senators, including three straight in the nation's capital, starting Thursday. The Leafs, meanwhile, open a five-game road trip Saturday in Edmonton with the first of three against Oilers before two more versus the Vancouver Canucks.

Zach Hyman returned to the Toronto setup after missing Monday with a suspected foot injury, slotting into Thornton's spot on the top line with Matthews and Mitch Marner to start the game. Hyman also spent some time with the Leafs' 23-year-old stars earlier in the schedule when Thornton missed 10 contests with a rib fracture.

Toronto's power play, which remained tied for first in the NHL entering Wednesday despite going 0 for 7 in that shutout loss to Calgary, got a chance seven minutes into the third after a disjointed 0-for-3 performance in the first, but still couldn't get anything going with Matthews, Marner, John Tavares and Nylander loaded up on the top unit.

Rittich continued to shut the door on the Leafs, including a nice stop with Alexander Barabanov in alone with under five to go in regulation before the teams traded late goals.

Tavares had a great chance to open the scoring in the second off a pass from Matthews, but Rittich made a terrific right-pad save at full stretch.

Toronto, which hadn't been shut out this season before Monday, got another opportunity on a 2-on-1 break shorthanded later in the period only to see the Calgary netminder rob the snake-bitten Ilya Mikheyev following a great saucer pass from Alexander Kerfoot.

Rittich then shut the five-hole on a partial break for Matthews, who crashed into the end boards after a shove from Rasmus Andersson and subsequently had his right wrist taped by a trainer on the bench.

Hutchinson denied Johnny Gaudreau at the other end after he stepped into the slot as the teams went to the locker rooms knotted 0-0.

The Leafs spent a large chunk of Tuesday's practice on special teams, but didn't get a decent look until the tail end of their third chance in the opening period when Matthews fired right at Rittich. Morgan Rielly also had a chance as the man advantage expired.

Notes: Barabanov, who had an inconclusive COVID-19 test this week before producing two negatives results, was in the lineup for a second straight game after not dressing for eight of Toronto's last nine outings. ... The Leafs and Flames play five more times this season, with the next meetings set for March 19 and 20 back at Scotiabank Arena.