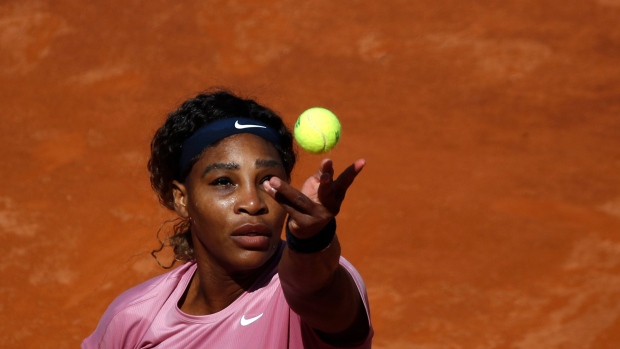 Serena Williams of the United States serves the ball to Nadia Podoroska of Argentina during their match at the Italian Open tennis tournament, in Rome, Wednesday, May 12, 2021. (AP Photo/Alessandra Tarantino)

ROME (AP) - Serena Williams' 1,000th tour-level singles match ended in defeat as she marked her return to action with a 7-6 (6), 7-5 loss to Nadia Podoroska on Wednesday in the second round of the Italian Open.

The eighth-seeded Williams, who hadn't played since the Australian Open, rallied from a break down twice in the opening set and saved the first three set points she faced in the tiebreaker before Podoroska converted her fourth. The Argentine went on to win in 1 hour, 58 minutes.

“It's tough to have a first match on clay. It was definitely kind of good to go the distance and to try to be out there, but clearly I can do legions better,” said Williams, who has won the Italian Open four times. “Maybe I do need a few more matches, so I'm going to try to figure that out with my coach and my team and see what we would like to do. I have been training for months, but it feels definitely different on clay to make that last adjustment.”

The 24-year-old Podoroska took a 5-2 lead in the second set but was broken at love the first time she tried to serve out the match. She broke Williams again in the 12th game to seal her third career win over a top-10 player.

“It's special win. She's a great athlete. She did too many things for our sport. It's history,” Podoroska said. “So for me it's very special. But most of all, I'm happy the way I played. I felt again comfortable on clay, on my game, and that's most important for me.”

Defending champion Simona Halep was forced to retire with a left calf injury in the second set of her match against fellow former No. 1 Angelique Kerber.

The third-seeded Halep was leading 6-1, 3-3 before her injury.

Second-seeded Naomi Osaka is also out after losing 7-6 (2), 6-2 to Jessica Pegula of the United States. Fourth-seeded Sofia Kenin lost 6-1, 6-4 to Barbora KrejÄikova.

In the men's tournament, Rafael Nadal held off a strong challenge from local teenager Jannik Sinner to prevail 7-5, 6-4.