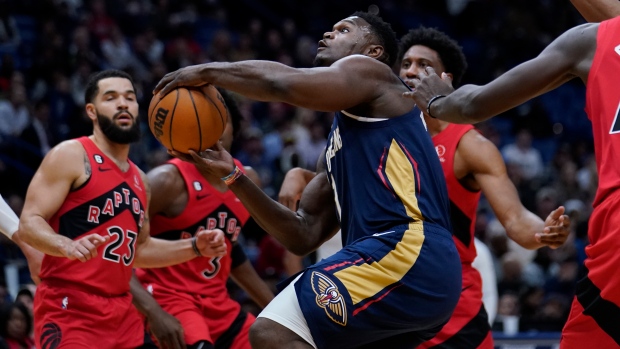 But Williamson, who also had 10 rebounds, iced the game by igniting a 6-0 run. He blocked a Pascal Siakam layup attempt at one end and finished with a dunk at the other. He then had steals on Toronto's next two possessions, helping push New Orleans' lead to 121-102 with 3:24 left.

Toronto was led by Gary Trent Jr., who scored 35 points, and Pascal Siakam with 23.

In shooting 63% in the first half, the Pelicans had 19 assists on 28 made field goals. Rookie Dyson Daniels contributed eight points and five assists in 11 minutes.

Siakam scored the first nine points for Toronto, but the Raptors hurt themselves with 10 turnovers in the first half.

Raptors: G Fred VanVleet picked up his second technical foul and went to the locker room just 41 seconds into the second half. â€¦ Coach Nick Nurse said Pascal Siakam's 10-game absence, during which Toronto went 5-5, helped the Raptors not be “so heavily reliant” on his 24.1 ppg scoring. “He's obviously our go-to guy and best decision-maker, but it still doesn't mean that we can't work in some of the other things. â€¦ I'm just hoping we can stay healthy here for a little while.”

Pelicans: F Brandon Ingram (left toe), G CJ McCollum (reconditioning) and F Naji Marshall (non-COVID illness) missed the game. â€¦ F Herb Jones twisted his left ankle and left midway through the third quarter. â€¦ F Larry Nance Jr. returned from a sore right shoulder. â€¦ Coach Willie Green likes to break down the season into 10-game increments. The Pels went 5-5 in the first 10 and 7-3 in the second 10. “It's our way of not trying to get too far ahead of ourselves and just focus on what maybe one or two things we can do offensively and defensively to improve.”

Pelicans: At San Antonio on Friday before returning for four straight at home.