Wizards play spoiler, beating Raptors 98-83 in their first game at home in 600 days 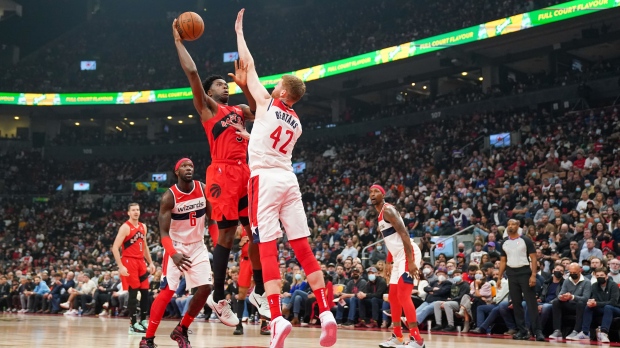 TORONTO - Six hundred days after they'd played a meaningful game in Toronto, the Raptors finally made their return.

For some of them, coach Nick Nurse suggested, the emotion might have been too much.

“It seemed to me we weren't fully engaged and something was there, and it probably was that it was a pretty big moment,” Nurse said.

Bradley Beal scored 23 points, Montrezl Harrell had 22, and the Washington Wizards spoiled the Raptors' long-awaited return to Toronto with a 98-83 victory on Wednesday.

Fred VanVleet and Scottie Barnes had 12 points apiece to top Toronto in what VanVleet said felt like a “playoff atmosphere.”

“We let the crowd down, that was a hell of a crowd,” he said.

OG Anunoby had 11 points and 10 rebounds, while Goran Dragic and Montreal native Khem Birch each had nine points.

Anticipation had been sky high ahead of Wednesday's opener, but the rebuilding Raptors, without veteran Kyle Lowry for the first time in a decade, struggled from the opening whistle. They trailed by 20 points in the first half. The gap grew to 29 in the third quarter.

VanVleet, who wasn't pleased with his own game, particularly his 1-for-9 three-point shooting, said his message in the locker-room to his young teammates was: “I told you so.”

“I've been telling them for a month now, a month and a half. You can get all the pats on the back and all the hype and everything that you want. Pre-season was great, training camp was great. It does not matter. There's different lights out there (when the regular season starts),” he said.

“Nerves and all that come in a lot of different forms and fashions,” he added.

A spirited comeback attempt, sparked by rookie and Toronto native Dalano Banton, finally gave fans a reason to cheer. Banton entered the game with 25 seconds left in the third, and promptly knocked down a buzzer-beating three from 49 feet out to slice the Wizards' lead to 81-59 with one quarter to play.

He never imagined his first NBA basket would be such a big one.

“But I'm grateful it went in, and I'm glad that's my first bucket and got it in the books,” the 21-year-old said.

A dunk by Montreal native Birch punctuated an 11-4 Raptors run that pulled them to within 15 points, and brought the capacity crowd of 19,800 - including Drake and Olympic decathlon champion Damian Warner - to life.

Anunoby connected on a three-pointer with 4:28 to play that cut the difference to 13. A Barnes free throw made it a 10-point game, but that was as close as they'd come.

The Raptors, who are still without Pascal Siakam who's recovering from shoulder surgery, were scattered on the offensive end through the first three quarters, tossing up off-target three-pointers - they were 4-for-25 from distance heading into the fourth quarter - and wasting fast break chances.

“I almost throw it down to it's one of those nights tonight,” Nurse said. “There was a whole bunch of point-blank layups that just kept finding a way to roll off and they were kind of spirit-takers a little bit.”

The take-away was these new-look Raptors have a long way to go. But on a good night, they could be fun to watch.

“Listen, it's going to be some of these, right?” VanVleet said. “It is what it is, nothing we can do about it. At this point, we're trying things, a lot of things, and none of it worked out tonight. Hopefully, we'll go back to the drawing board and try to come up with something that will work for us in Boston (on Friday).”

Toronto shot a horrible 30.9 per cent on the night, 20.6 per cent from behind the arc. Washington, meanwhile, shot 45 per cent from the field.

Only four Raptors remain from the roster that played in Toronto on Feb. 28, 2020, a game against Charlotte that only history made memorable. COVID-19 shuttered the NBA less than two weeks later.

Last season, border restrictions and COVID-19 protocols forced the Raptors to call Amalie Arena in Tampa, Fla., home - but it was a poor substitute for the real thing. They were the only NBA team forced to play outside their market.

The Raptors were permitted 50 per cent capacity at Scotiabank for the pre-season, getting the green light from the Ontario government on Oct. 12 for a full crowd.

The emotional pre-game ceremony featured a spoken word poem “We Back,” by Hannah Flores. Rapper Kardinal Offishall performed “The Anthem,” his iconic ode to Toronto.

Banton, who grew up in the Toronto neighbourhood of Rexdale - he's the first Canadian ever drafted by the Raptors - couldn't contain his huge grin during player introductions.

“Just to play in front of your home crowd and hear that noise and hear that chant is great,” he said. “I appreciate all those fans who are just loving me and taking me in with such open arms.”

VanVleet was met with a raucous ovation when he took the mic at centre court. He thanked the crowd for their support, saying “We're all excited about this year, so let's get it started the right way.”

Washington had other ideas.

The Raptors got off to a rough start, shooting 29.2 per cent in the first quarter to trail 26-18 heading into the second.

They were even shakier in the second quarter, and when Raul Neto scored on a running reverse layup with 3:47 left in the half, the Wizards went up by 20. Washington led 57-37 heading into the halftime break.

The Raptors are in Boston on Friday, then return home to host the Dallas Mavericks on Saturday.