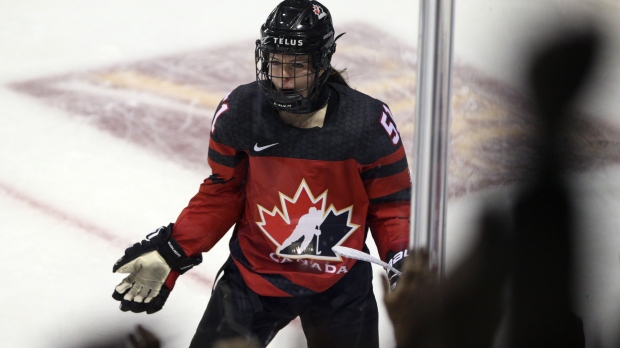 Team Canada's Victoria Bach celebrates after scoring the winning goal against Team USA's during 3-on-3 overtime action of the Rivalry Series in Victoria, B.C., on February 3, 2020. THE CANADIAN PRESS/Chad Hipolito

The women's world hockey championship in Nova Scotia has been cancelled a second time because of COVID-19.

The championship, scheduled for May 6-16 in Halifax and Truro, N.S., was called off Wednesday, a day before participating countries were to arrive to begin their quarantines.

The International Ice Hockey Federation and Hockey Canada were told by the Nova Scotia government Wednesday morning the 10-country tournament could not go ahead because of concern over the rising number of coronavirus cases in the province and circulation of the virus's variants.

Premier Iain Rankin withdrew permission for the tournament a day after the province's chief medical officer Dr. Robert Strang said he was comfortable with the protocols in place for it.

“I sincerely regret the short notice, but the rapidly changing environment dictates this decision in the interest of the safety of Nova Scotians and participants,” Rankin said in a statement.

“We have worked diligently with Hockey Canada to ensure we can stage a safe and successful world hockey championship and they have been a great partner, but the safety of the Nova Scotia public and participants is paramount and is the reason for our decision.”

Nova Scotia imposed travel restrictions Tuesday barring travellers from outside the province, Prince Edward Island and Newfoundland and Labrador from entering unless travel is essential or they're permanent residents of Nova Scotia.

The 2020 women's championship in Nova Scotia was cancelled because of the global pandemic.

The 2021 tournament there was scheduled for April 7-17, but delayed in hopes the pandemic situation would improve.

“This is very disappointing news to receive with just a few weeks until the tournament was to begin,” IIHF president Rene Fasel said in a statement.

“We strongly believe that we had the adequate safety measures in place to protect players, officials, spectators, and all residents in Halifax and Truro, based on the IIHF and Hockey Canada's experiences from hosting the IIHF world junior championship in Edmonton.”

Hockey Canada still wants to host the tournament and will work with the IIHF to hold it this summer.

“In the end, we must accept the decision of the government,” Fasel said. “This does not mean that we will not have a women's world championship in 2021.

“We owe it to every single player that was looking forward to getting back on the ice after such a difficult year that we do everything possible to ensure this tournament can be moved to new dates and played this year.”

Eight participating countries were about to board IIHF charters Wednesday. The reigning world and Olympic champion United States was arriving via ground transportation.

Canadian Lisa Haley, who coaches the Hungarian women's team, said players were at their Budapest rink packing up gear to take to the airport when they were told to stand down.

The Canadian women's team has been in Halifax for the last week for a 47-player selection camp at Scotiabank Centre.

“This comes with several bad news with it being postponed from last season to so many uncertainties this past season,” Hockey Canada's director of national teams Gina Kingsbury said.

U.S. women head coach Bob Corkum stepped down, telling The Associated Press on Saturday he was uncomfortable with tournament protocols without elaborating.

“While we are disappointed with the cancellation, we understand the decision was made with the health and safety of all participants and the community at large as the top priority.

“We support the decision that has been made.”

The men's world championship is scheduled to open in less than a month in Riga, Latvia. January's women's under-18 hockey championship in Sweden was cancelled.

- With files from Keith Doucette in Halifax.