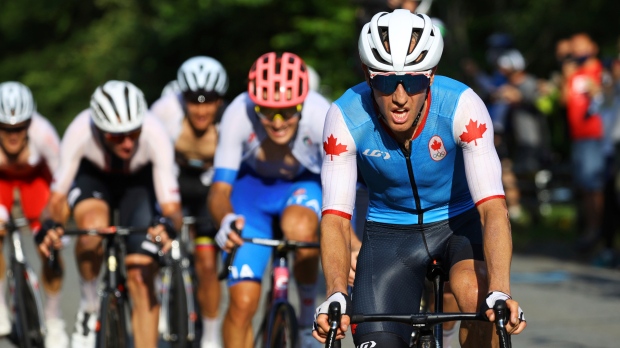 The Ottawa cyclist finished fifth in a thrilling men's road race Saturday at Fuji International Speedway on a day that also saw Canadian athletes take to the diamond, the court and the beach.

Woods, an outstanding climber, threatened often on the challenging road course framed by the iconic Mount Fuji that featured ascents as high as 1,451 metres.

He was part of a competitive chase group over the final kilometres of the race that descended from the Kagosaka Pass. He aggressively pushed the chase group trailing eventual gold-medal winner Richard Carapaz of Ecuador, but in the end finished milliseconds out of a podium spot.

Woods finished the race in good company as part of a group finishing one minute seven seconds behind Carapaz. Wout van Aert of Belgium and Tadej Pogacar of Slovenia, a pair of cycling heavyweights, took silver and bronze respectively. Decorated Dutch rider Bauke Mollema was fourth.

A smattering of pre-opening ceremony events gave way to a full slate of contests on a sweltering Saturday that also saw the first handful of medals awarded.

Canada saw victories in beach volleyball and softball, mixed results on the tennis court and a loss in water polo.

The women's softball team bounced back from a loss to the top-ranked U.S. squad with a 7-1 drubbing of Australia.

Jenna Caira of Toronto was outstanding in 4 2/3 innings of relief pitching, while Jennifer Salling and Erika Polidori each drove in two runs.

Caira struck out three, gave up just two hits and didn't walk a batter to get the win as Canada improved to 2-1 at the six-team tournament.

"I have an extreme amount of respect for Australia," said Salling, 34, from Port Coquitlam, B.C. "They're gritty -- they fight, they battle, they compete until the very end.

Canada will now turn its attention to the Olympic hosts for the fourth of its five round-robin games Sunday.

On the beach, Melissa Humana-Paredes and partner Sarah Pavan earned their first win, defeating the Dutch duo of Katja Stam and Raisa Schoon 2-0.

Pavan and Humana-Paredes have been dominant since they first partnered together five years ago, reaching the finals at 14 international events and winning seven.

A world title in 2019 qualified the duo for the Tokyo Olympics two years ago, then the COVID-19 pandemic delayed the Games by a year.

"We have been waiting for this moment for so long," said Pavan. "Last year was a roller-coaster of emotion.

"But we stayed disciplined and motivated and accountable -- not only to each other, but to our federation and to our sport and everyone who's been supporting us."

Pavan and Humana-Paredes will play Germany's Julia Sude and Karla Borger on Monday.

In tennis, Leylah Fernandez needed three sets to win her Olympic debut on a mixed day for Canadian players.

Fernandez, an 18-year-old left-hander from Montreal, defeated Ukraine's Dayana Yastremska 6-3, 3-6, 6-0 in just over two hours on a hot afternoon at the Ariake Tennis Park.

In women's doubles play, the seventh-seeded duo of Gabriela Dabrowski of Ottawa and Sharon Fichman of Toronto dropped a 7-6 (3), 6-4 decision to Brazil's Laura Pigossi and Luisa Stefani.

Dabrowski still plans to play in the mixed doubles draw later in the tournament with Montreal's Felix Auger-Aliassime, who will face Britain's Andy Murray in his opening singles match Sunday.

In water polo, Canada dropped an 8-5 decision to Australia in Group A action. The Canadians next take on Spain on Monday.

This report by The Canadian Press was first published July 24, 2021.