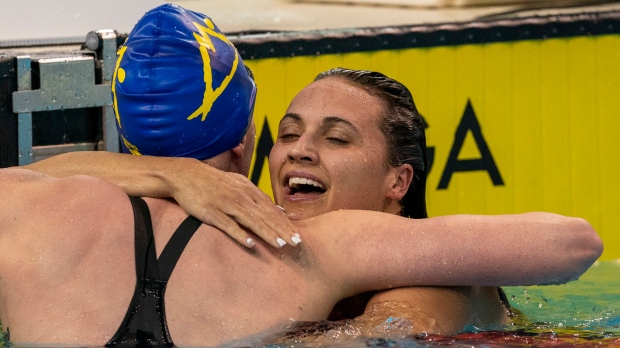 Kylie Masse (right) is congratulated by Ingrid Wilm after winning the Women's 200m Backstroke at the Olympic Swimming Trials in Toronto on Wednesday June 23, 2021. THE CANADIAN PRESS/Frank Gunn

TORONTO - The swim team was a force for Canada at the last Summer Olympics in Rio. The squad is shaping up to be just as formidable at next month's Games in Tokyo.

“I think we are incredibly hard-working and just (a) group of athletes who are ready to take on whatever Tokyo throws at us,” said world champion Kylie Masse, who closed the Canadian Olympic trials with a win in the women's 200-metre backstroke.

“We are so excited to be able to compete again and to be racing the best in the world. I think that in itself is going to really elevate our spirits.”

Masse, from LaSalle, Ont., finished first in two minutes 6.67 seconds at the Toronto Pan Am Sports Centre. She was pushed by Taylor Ruck of Kelowna, B.C. (2:09.26), who also finished under the 'A' qualifying time set by world governing body FINA.

The top two finishers in each event at this five-day competition earned the right to race in Tokyo, provided they met the 'A' standard.

This event was originally scheduled for 2020 but that plan was scrapped when the Olympics were postponed to 2021 due to the COVID-19 pandemic. The trials were postponed on two occasions this year before finally wrapping Wednesday night.

Swimming Canada invoked an unforeseen circumstances clause in January to nominate a half-dozen athletes in events in which they excel. Masse and Ruck made the list along with Toronto's Penny Oleksiak, Markus Thormeyer of Delta, B.C., world champion butterflyer Maggie Mac Neil of London, Ont., and Sydney Pickrem of Clearwater, Fla.

Masse set a world record (58.10) in the women's 100-metre backstroke at the 2017 world championship. She defended her world title two years later and also earned a bronze in the 200.

She won bronze in the 100 in her Olympic debut in 2016, part of a six-medal effort for Canada's swim team at those Games. Oleksiak, who won the women's 100-metre free on Tuesday, led the way with two individual medals and two relay medals in Rio.

In addition to the performances from the expected Tokyo contenders, there were other interesting storylines that developed at the trials.

Chief among them was 14-year-old Summer McIntosh of Toronto, who edged Oleksiak in the 200 free and breezed to victory in the 800 free. McIntosh is the daughter of Jill Horstead, who swam for Canada in the 1984 Olympic Games.

Brent Hayden of New Westminster, B.C., also cleared another hurdle in his comeback with an impressive win in the 50-metre freestyle. The three-time Olympian took a seven-year break before returning to the pool in 2019.

Over 180 swimmers were invited from 64 clubs to compete under pandemic protocols and restrictions at the east Toronto venue. Fans were not allowed inside and artificial crowd noise was piped into the building to help provide a meet-like atmosphere.

Swimming Canada will announce its official nominations for the Tokyo roster on Thursday morning. The Olympic Games are set for July 23-Aug. 8.