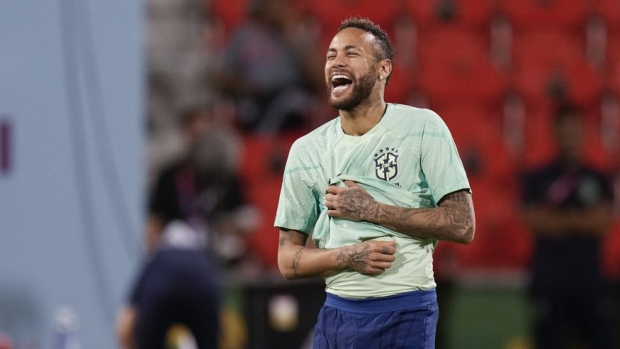 Brazil's Neymar smiles during a training session at the Grand Hamad stadium in Doha, Qatar, Sunday, Dec. 4, 2022. Brazil will face South Korea in a World Cup round of 16 soccer match on Dec. 5. (AP Photo/Andre Penner)

DOHA, Qatar (AP) — Neymar appeared to have fully recovered from his ankle injury and was expected to return to Brazil's starting lineup against South Korea in the round of 16 at the World Cup on Monday.

A smiling Neymar trained with teammates Sunday in a practice session that was partially open to media. He appeared to no longer be bothered by the injury that kept him out of Brazil's previous two matches.

Coach Tite had said earlier in the day that Neymar would play if all went well in the team's final training session before the match against South Korea.

The Brazil forward missed two group matches after injuring his right ankle in the team's opening win over Serbia. He was back training for the first time on Saturday.

Tite said he planned to use Neymar from the opening whistle instead of as a substitute if he's healthy enough to play.

“I prefer to use my best player from the start,” Tite said. “It’s the coach who has to make that decision and take on that responsibility.”

Tite said left back Alex Sandro is out because of a hip injury, but right back Danilo will be available after recovering from a right ankle injury.

Brazil struggled without the playmaker but still won its group despite a loss to Cameroon in the last match.

“Obviously we won’t say that it’s better to face Brazil when Neymar is playing, but I always prefer when the best players are there,” South Korea coach Paulo Bento said.

South Korea advanced after a surprise win over Portugal in the team's last group game, making it to the last 16 for the first time in 12 years.

Tests after the Serbia match showed ligament damage in Neymar’s ankle and it wasn’t clear if he would be able to play again in Qatar. His ankle looked bad, with a lot of swelling, and doctors wouldn’t say if he would recover during the tournament.

But after undergoing intensive physiotherapy treatment, Neymar improved and was back training on Saturday. In footage released by the Brazilian soccer federation, he appeared to be in good condition, doing drills with the ball and taking shots on goal without signs of his injury.

Midfielder Fred replaced Neymar against Switzerland. With Brazil already through to the knockout phase, Tite rotated the entire squad against Cameroon.

This will be the first time Brazil and South Korea meet in an official match, with the Brazilians winning six of their seven friendlies, including 5-1 in June. South Korea’s only win came in 1999.

“We can't think it's going to be an easy game like it was in that friendly,” Brazil captain Thiago Silva said. “Now it's the World Cup and they've advanced in a very tough group. We have a lot of respect for them.”

South Korea advanced in Qatar thanks to a dramatic stoppage-time goal by Hwang Hee-chan in a 2-1 victory over Portugal. The team had drawn with Uruguay in its opener and then lost to Ghana.

Hwang was expected to be in the starting lineup again against Brazil after missing the team’s first two games because of a hamstring injury.

Bento complained of the short three-day rest period between games from the group stage to the round of 16, saying it hurt South Korea more than Brazil, which rested its regular starters in its final group match.

South Korea is trying to advance past the round of 16 for the first time since its historic run as a co-host in 2002, when it made it to the semifinals and ended up fourth. The South Koreans were eliminated in the group stage both in 2014 and 2018.

Brazil is trying to win its first World Cup title since the 2002 tournament in Japan and South Korea. The Selecao has made it to the quarterfinals in every tournament since then, with its best run being the semifinal appearance at home in 2014.

The winner of the match will face either Japan or 2018 runner-up Croatia in the quarterfinals.