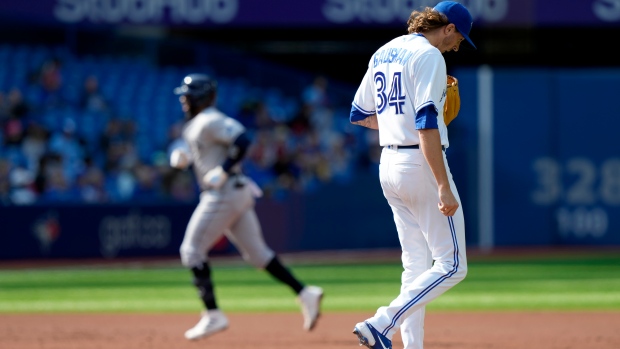 TORONTO - Yandy Diaz had a three-run homer in the second inning and the Tampa Bay Rays never looked back in a 11-0 win over the Toronto Blue Jays on Thursday afternoon.

Rene Pinto had an RBI single as part of Tampa's four-run second. Isaac Paredes added a solo home run in the seventh and drove in another run during a rally in the ninth.

Bo Bichette had two hits, including a double, and a stolen base for Toronto (81-63).

Kevin Gausman (12-10) allowed five runs on six hits but struck out seven and issued only one walk. Zach Pop, Trevor Richards, and David Phelps came out of the bullpen for the Blue Jays, with Richards getting charged for five runs and Phelps one.

Although Toronto won the five-game series with the Rays 3-2, Thursday's loss cut the Blue Jays' lead over Tampa in the American League's wild-card race to a half game. The Seattle Mariners hold the other wild-card berth.

Toronto welcomes the division-rival Orioles to Rogers Centre on Friday for a three-game series. Baltimore is chasing the Blue Jays, Rays, and Mariners for a wild-card spot.

Pinto got Tampa Bay on the board in the second when his centre-field single scored David Peralta and advanced Paredes to third. The Blue Jays challenged the play, arguing that Paredes should have been ruled out after he lost his balance on the bag as Toronto third baseman Matt Chapman applied the tag.

After officials examined video replay they ruled that the Paredes kept his foot on the bag.

Two batters later, Diaz hit his ninth home run of the season to deep left field to score Paredes and Pinto and give the Rays a sizable 4-0 lead.

Gausman settled down after that costly inning, retiring 12 of the next 13 batters he faced, only allowing a single to Peralta in the fourth.

The Rays got to Gausman again in the seventh when Paredes led off the inning with his 19th home run of the season to make it 5-0. Gausman got out of the inning without allowing any more runs.

Tampa didn't relent in the ninth, going through its entire batting order in the inning and scoring six runs.

ROBERTO CLEMENTE DAY - Bichette was honoured in a pre-game on-field presentation as the Blue Jays' nominee for the Roberto Clemente Award. The award is given to the “best exemplifies the game of baseball, sportsmanship, community involvement and the individual's contribution to his team

CAPTAIN KIRK - All-star catcher Alejandro Kirk was out of the Blue Jays lineup on Thursday as he dealt with tightness in his left hip. Interim Toronto manager John Schneider said that Kirk could be available off the bench.

ON DECK - Schneider said that Friday's series opener against the Orioles would be “a bullpen game of some sort” with an opener pitcher being named later. The Orioles will start the three-game series with Austin Voth (5-2) on the mound.

This report by The Canadian Press was first published Sept. 15, 2022.