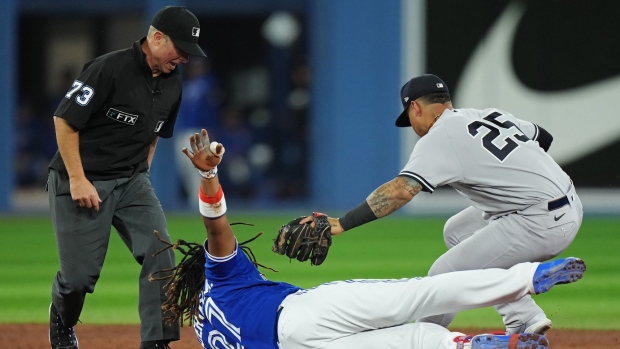 As the Toronto Blue Jays filed out of their clubhouse and into the night, the champagne-drenched New York Yankees returned to the Rogers Centre field to mug for a celebratory photo near the pitcher's mound on Tuesday.

About a half-hour earlier, the Yankees claimed their 20th American League East title by defeating the Blue Jays 5-2.

The Yankees (95-59) eighth win in their last nine games provided an 8 1/2 game lead over the Blue Jays (87-68) with eight games remaining for New York and seven for Toronto.

"We knew this was coming, but it's only step one," Yankees slugger Aaron Judge said.

Judge scored twice with four walks and a first-inning line out to third as he remained stuck at 60 homers, one shy of the AL record set by Roger Maris in 1961.

The patient Judge has gone seven games without a homer since he belted his 60th on Sept. 20. But he has walked 12 times in the last seven outings.

Yankees starter Jameson Taillon (14-5) was brilliant. After George Springer smacked a solo shot to straightaway centre for his 52nd career leadoff homer on the second pitch, Taillon (14-5) settled down.

He retired 16 of the next 17 Blue Jays. Only Whit Merrifield reached base on an infield hit before Springer and Bo Bichette singled in the sixth inning.

Springer scored on Vladimir Guerrero Jr.'s shot down the left field line but, like Bichette before him, was thrown out at second base.

"Every 90 feet matters this time of the season. That wasn't our best right there."

Taillon's 94-pitch outing saw him depart with one out in the eighth inning. He gave up two runs on seven hits with six strikeouts and no free passes.

Toronto starter Jose Berrios (11-7) was knocked out of the game after 5 1/3 innings. He yielded nine hits on five runs with two walks and seven strikeouts.

He pitched well despite his situation. When the Blue Jays were in Tampa Bay last weekend, he helped prepare his home in that area and make evacuation plans for his family because of Hurricane Ian.

The Yankees' offence picked up in the third inning. Catcher Kyle Higashioka, who also belted out three hits, began the two-run splurge with a single and advanced to second after Judge walked.

Anthony Rizzo's single to right scored Higashioka and Judge followed him home after a Torres bouncer up the middle.

Judge scored again in the fifth after a leadoff walk, followed by singles from Rizzo and Torres.

The Yankees picked up two more an inning later thanks to back-to-back doubles from Higashioka and Aaron Hicks and another RBI single from Torres.

"They gave themselves quite a cushion in the first half," Schneider said of the Yankees clinching in Toronto.

"We're hoping to play deep into October. You move on. You got to go out tomorrow and try to win the series."

Matthews wanted to throw from the mound. However, he was instructed by the Blue Jays mascot to make his toss in front of the mound.

Matthews played baseball and hockey as a kid in Scottsdale, Ariz. His father played baseball at the collegiate level. Mitch Marner and Michael Bunting accompanied their linemate to the Rogers Centre.

Mitch White (1-6) will face Yankees righty Gerrit Cole (12-7) in the series rubber match on Wednesday. In his only career start against New York, White gave up seven hits and one run with five strikeouts in four innings in a no-decision at Yankee Stadium on Aug. 20.