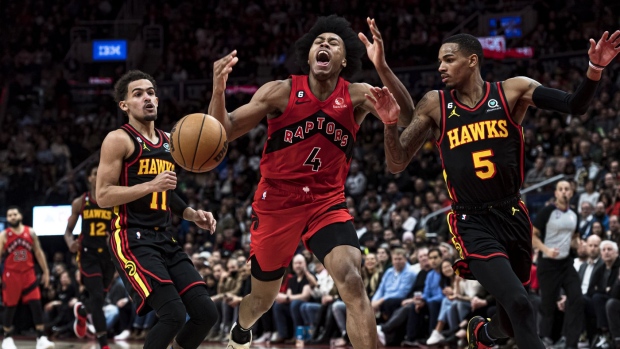 The Toronto Raptors' shooting struggles returned to haunt them Saturday.

Trae Young had 29 points and nine assists to lead the Atlanta Hawks to a 114-103 win over the Raptors at Scotiabank Arena.

Dejounte Murray contributed 27 points, eight rebounds and six assists for Atlanta (21-22), which has won two in a row.

The Hawks were coming off a 113-111 win over the Indiana Pacers on Friday in the first stop of their two-game road trip.

Scottie Barnes had 27 points and 12 rebounds for Toronto (19-24), which had its three-game win streak snapped. Pascal Siakam, who fouled out late in the fourth, added 15 points and O.G. Anunoby scored 14.

The Raptors closed out their six-game homestand at 3-3.

Toronto went down 20-3 halfway through the first quarter, going 1-for-13 from the field and 0-for-5 from beyond the arc.

However, the Raptors turned things around after Anunoby snapped their three-point slump with 5:39 left. Siakam and Malachi Flynn then combined for 15 points and Toronto cut the deficit to as little as seven, going into the second down 34-25.

The Raptors moved their operations inside the perimeter, attempting three three-pointers in the second — all misses. Precious Achiuwa provided a spark, scoring 11 points off the bench, while Barnes contributed nine of his 13 second-half points in the frame.

But the Hawks kept Toronto at bay, leading by as much as 14. Murray had a personal 6-0 run in a span of 53 seconds, including an alley-oop dunk, and Atlanta went into halftime up 69-57.

With the Raptors cutting the deficit to just 10 late in the third, the Hawks went on a 10-4 run with 1:44 left in the third. A 29-foot three-pointer from Young with 1.8 seconds remaining put Atlanta up 96-79 heading into the fourth.

The Raptors went on an 8-0 run, capped by a Chris Boucher three-pointer with 8:24 on the clock to bring the score to 100-91. After an exchange of shots that saw the score go between an eight- and 10-point game, Boucher hit another three with 3:07 remaining to cut the deficit to seven.

After both sides traded trips to the charity stripe, leading to both Siakam and John Collins getting fouled out, a Young three-point play with 55.3 seconds left sealed it.

Raptors head coach Nick Nurse, whose squad leads the NBA with 9.4 steals per game, thinks the rim protection has been coming along.

"We’re getting a few more blocked shots, we’re standing in there a bit better," he said pre-game. "I think we’re making better reads out (and) once we do have it covered, we don’t have so many guys covering it at once.”

Canadian actor Simu Liu, known for his roles in movies Shang-Chi and the Legend of the Ten Rings, had a courtside seat Saturday.

The Raptors head to New York on Monday to take on the Knicks for the first stop on a three-game road trip. Toronto is 1-1 against New York this season, falling 112-108 in their last meeting on Jan. 6 at Scotiabank Arena and winning 113-106 at Madison Square Garden on Dec. 21.

This report by The Canadian Press was first published Jan. 14, 2023.