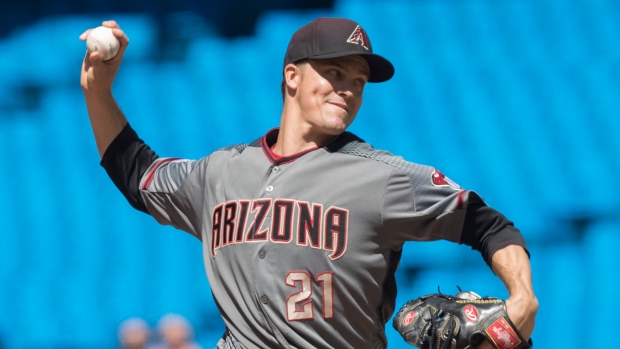 The Blue Jays only managed four hits off Greinke in a 6-0 loss before 22,954 fans at Rogers Centre on Saturday.

The 35-year-old Greinke was given an extra day off between starts after he complained of a stiff neck in his last outing on June 1. He lasted only four innings against the New York Mets, yielding four runs on seven hits.

But he returned to form against the struggling Blue Jays. He tossed six innings plus a batter, struck out seven and allowed only one runner past first base to improve his record to 7-2.

The way this season has gone for the Blue Jays the only small gains made have been in the play of some of their young talent.

For example, outfielder Lourdes Gurriel Jr., was Toronto's bright spot in the 6-0 loss to the Diamondbacks at an open-roofed Rogers Centre on a sunny afternoon.

Gurriel Jr., was the Toronto batter to make it further than first base against Greinke with a leadoff triple in the seventh inning. The 25-year-old Cuban left fielder also made a sliding catch to save a run in the eighth inning. With a runner on first base, Gurriel ran from left centre field to the foul line to catch a fly ball off the bat of Arizona shortstop Nick Ahmed.

"Definitely the play I made in left field because they didn't score," said Gurriel through an interpreter, when asked if he was more proud of his brilliant catch or his first triple of the season.

"I ran as hard as I could to get that ball. I just wanted to make a catch that ball to avoid that run to score."

But even though the Blue Jays (23-41) dropped their third game in a row, have lost 13 of their last 16 outings and fell to a season-low 18 games below 500, Gurriel has been solid since his recall from the triple-A Buffalo Bisons on May 24.

He's batted .314 with nine extra-base hits and has made a smooth transition from the middle infield positions he has played to the outfield.

"He went down there and worked hard on his outfield play," Toronto manager Charlie Montoyo said. "He didn't take for granted that he would be called up again.

"He's been so good in the outfield that I don't want to move him back to the infield for now. That play he made was an above average play. He went a long way to make that play. It was an outstanding play."

The biggest challenge for Gurriel in his move to the outfield has been reading the ball off the bat of opposing hitters. But you can see him shagging fly balls and working with first base coach Mark Budzinski during batting practice.

"I've been very focused since I got back from the minors," he said. "I'm working hard, I'm confident and thank God things have been going well."

Cold bats continue to contribute to the Blue Jays recent doldrums. They scored two-or-fewer runs in five of their past seven outings.

In improving his record to 7-2, Greinke allowed just four hits in his six-plus innings.

"I don't think it's that were so young, it's just that things aren't happening right now," Gurriel said in explaining the Blue Jays lack of offence.

The 35-year-old Greinke struck out seven to push his career total to 2,517 and move past former Toronto pitcher A.J. Burnett into 34th place on the all-time list.

Guerrero hit a rocket off the wall in centre field in the first inning. But he was held to a single as Arizona centre fielder Jarrod Dyson perfectly played the carom.

Smoak smashed a similar drive off the top of the wall down the right-field line in the sixth inning, but like Guerrero, Smoak was held to a long single thanks to a heady play from Diamondbacks right fielder Tim Locastro.

The Blue Jays best chance to score was after the leadoff triple from Gurriel in the seventh inning. But Arizona reliever Andrew Chafin struck out Toronto first baseman Rowdy Tellez. Yoshihisa Hirano then was summoned from the Diamondbacks bullpen, and he fanned Hernandez and shortstop Brandon Drury.

Guerrero added a second single in the eighth inning to bring Toronto's hit total to five.

Diamondbacks catcher Alex Avila smacked his third home run of the season off Aaron Sanchez in the sixth inning and first baseman Kevin Cron hit a shot out in the ninth.