TORONTO - Steven Page says he can't see himself ever rejoining the Barenaked Ladies and feels weird that the band didn't change its name after he left almost two years ago.

Page -- who co-founded the Toronto group -- announced his split from the Ladies in February 2009. On Tuesday, he'll release "Page One," his first solo album since the break-up.

Asked if he'd get back together with the Barenaked Ladies down the road, he was emphatic.

"No, I wouldn't," he said. "I mean no offence to anybody by this, but although I was sad and so on when we split ... I've never had a day where I thought: 'I wish I was still in the band.'

"The money was good, but I didn't want to do it for that reason anyway. ... But, like, I never thought: 'Oh, I wish I was in the studio with them,' or 'I wish I was on tour with them.' All those things that they're doing, I'd like to do and it probably won't be on the same level, at least for now. I wouldn't ever be averse to getting together to do a few songs or a show together one time, or something like that, especially if there was a cause we all believed in. That would be great.

"But I'm not looking to be a full-time member again."

The split was initially considered mutual and fairly amicable -- Page even contributed a short statement to the band's website that read, "I love them and wish them all the best in the future."

But things seemed less friendly when the band put out their first album without Page in March. When the first single, "You Run Away," was released, Page tweeted that the song was a "low blow" and that it "sucks being a target."

The song included the lyrics: "I tried to be your brother/ You cried and ran for cover/ I made a mess, who doesn't?"

Barenaked Ladies singer Ed Robertson has conceded that the song was partly inspired by Page, but said it's not "totally about him."

"They've denied it until they're blue in the face," Page said Thursday. "I know what it's like to write songs with Ed -- not everything is a specific address to somebody else, but I also know that we've written songs about other people. Usually it's been fairly veiled and we are trying to make a point."

"But it was pretty obvious what he was talking about."

Page took umbrage with the song and says he didn't listen to the rest of the album, only the singles.

"I felt like some of (the lyrics weren't) true, first of all, but it made for a good song," said Page, clad in a striped button-down, blue jeans and sneakers. "And for me, for a guy who's worked with him for so long, I felt like they could've done better, frankly.

"I know they have the potential to be really great and I know they believe in what they're doing, but none of it made me want to go back in the band, which was good for me. I didn't listen to that and go: 'God, I wish I was up on stage playing that with them."'

Page said he also finds it odd that the band continues to use the Barenaked Ladies name given that one of their signature voices has departed.

"I didn't fight them for the name because I didn't want the name," he said. "It's not up to me. ... I can't imagine that if Ed had left the band and it was me and the other guys, it wouldn't feel like the Barenaked Ladies to me. That's just on my side."

He added that while the breakup was news in Canada, it wasn't in the U.S., and many fans probably went to see the band play not realizing that Page was no longer involved.

"A lot of music fans aren't going to check their Facebook every day to see what's going on, they just like what they like," he said. "Or it's like: 'I used to listen to these guys in college in 1995, so let's go see them!' Then they're like, 'This isn't the same thing.'

"That, coupled with the fact that they do a bunch of the songs that I wrote and sang, seems weird to me."

Page does perform some of the songs he wrote with BNL during his solo shows.

"(I) don't want people to think I'm embarrassed of the past," he said. "Because I think it'd be pretty easy to be like: 'I can't believe I was in that band.' It's like, no, it was too important and I'm happy with the accomplishments of the band."

Page's split from the Ladies capped a difficult period in his life.

In 2008, the singer, his girlfriend and her roommate were charged with drug possession after police found cocaine at a Fayetteville, N.Y., apartment.

Last October, all three secured a deal that resulted in dropped charges.

But somewhat surprisingly, "Page One" betrays little of the behind-the-scenes tumult that seemed to define the period for Page.

Opening track "A New Shore," a merry jaunt with acoustic guitar strumming lifted by a subtle string arrangement and pretty vocal harmonies, is about embarking on a new course. Baroque pop ditty "All the Young Monogamists," meanwhile, is Page's first-ever love song, wizened and weary though it is.

Even "Over Joy," which Page says is about dealing with depression, is a sprightly pop tune.

"With all the crap that I had gone through over the last few years, and so on, I think even I -- along with a lot of the fans -- assumed this record was going to be more morose or maybe more sonically difficult," said Page, who did explore more experimental territory with his CD, "A Singer Must Die," released with the Art of Time Ensemble in February.

"(I'm) a little bit surprised that it sounds as much like my contribution to BNL, but that's who I am. I'm proud of that legacy as well."

Page embarks on an American tour in November, with extensive Canadian dates sure to follow.

While he notes that plenty of people have been happy to hurl negativity his way online, the reaction from most fans -- particularly to his new solo material -- has been positive.

"Now as they're hearing stuff, yeah, people seem to be very excited, which is great," he said. "I think people were very skeptical. ... (Now) they're incredibly positive. Surprised. And I get people saying this on Facebook and Twitter too, they hear stuff and they go: 'Now I remember what I used to love about the band. I forgot that's what you brought to it.'

"And it's true. I think over the last bunch of years, people forgot what my contribution was to the group. Myself included, probably." 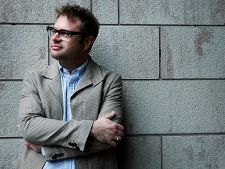 Singer Steven Page poses for a photograph in Toronto on Thursday, October. 14, 2010. Page has a new solo album coming out called "Page One." (THE CANADIAN PRESS/Nathan Denette)