Street racing is to blame for a fatal crash in Scarborough early Monday morning, police have confirmed.

The single-vehicle crash happened in the Kennedy Road and Finch Avenue area at around 5:45 a.m.

The force of the crash split the vehicle in half.

The male driver was rushed to hospital but later died.

A male passenger travelling in the vehicle is currently in hospital being treated for non life-threatening injuries, police said 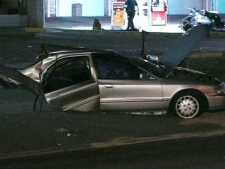