TORONTO - A study of toddlers in Canada's largest city found those who consume less milk and have higher body-mass indexes are more likely to have lower vitamin D levels.

While there's quite a bit of data from Canada and the U.S. related to adults and children and their vitamin D levels, there's much less for toddlers and kids over the age of one because they're difficult subjects to study, said lead author Dr. Jonathon Maguire.

Researchers conducted the small study involving 91 healthy children 24 and 30 months of age during their well-child doctor's visits between November 2007 and May 2008. Participants were recruited from a community-based pediatric group practice in downtown Toronto.

According to the findings published in Paediatrics & Child Health, researchers found 30 to 80 per cent of the toddlers had low vitamin D levels -- the highest such prevalence seen in toddlers outside of Alaska.

Maguire, a pediatrician and scientist at St. Michael's Hospital in Toronto, said the percentages vary because it depends on the cutoffs being used.

"Nobody really knows what the right serum level of vitamin D is for young children because we really don't understand all the health implications for low vitamin D," he said in an interview Monday.

Maguire said according to recommendations, children living in southern Canada over age one should be receiving 200 international units of vitamin D daily, largely from dietary sources.

However, he noted that a report released last year from the Institute of Medicine suggested the recommended dietary allowance for children aged one to three years should be 600 IU. It was adopted by Health Canada.

When it came to modifiable risk factors linked to lower vitamin D levels, consuming less cow's milk and having a higher BMI were associated with lower concentrations of the vitamin.

"The thing is, toddlers tend not to drink that much milk which in itself, is not wholly bad," he said. "But it means that they don't get all that much vitamin D from milk, but it looks to be quite a potent predictor of vitamin D status amongst that age group."

Maguire said it's not entirely clear why kids with higher BMIs have lower vitamin D levels, but he pointed to previous research on adults which offers some insight.

Since vitamin D is a fat-soluble vitamin, for individuals with greater fat mass, the same amount of vitamin D gets distributed over more of the body, so the amount circulating is relatively less, Maguire said.

Researchers in the current study on toddlers suggest their age may be partly responsible for lower vitamin D levels.

In a separate study published in the journal, researchers in Calgary looked at the relationship between vitamin D levels, dietary intake and BMI among children in that city.

The study looked at concentrations of Serum 25 (OH) D, a reliable biomarker of vitamin D status used to determine deficiency. Of 1,862 children, 1,442 were tested for vitamin D levels, of whom nearly 60 per cent were boys.

Study subjects were kids aged two to 13 who had elective surgery at Alberta Children's Hospital during a 12-month period.

Researchers found 37.4 per cent of participants had insufficient vitamin D levels. Two per cent of subjects were vitamin D-deficient.

Researchers conclude by suggesting it would be helpful to have a standardized method for measuring 25 (OH) D levels across Canada. They also suggest to ensure optimal bone health, health-care providers encourage children -- particularly those with risk factors -- to consume a vitamin-D enriched diet. 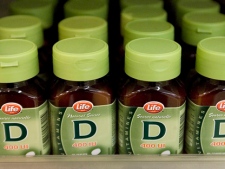