Officials with Sunwing and Pearson International Airport say there was no fire aboard a flight that was diverted to Toronto Friday evening.

Video footage captured from CP24 cameras show an extremely bright light eminating from the aircraft. Officials from both the Greater Toronto Aiport Authority and Sunwing Tour Operations say the plane was not on fire at any time and that the light seen in the video was likely a reflection of the landing light.

CP24 received word a Sunwing flight was making an emergency landing at Pearson because of a fuel-related problem. Our live cameras caught a Sunwing plane descending with a visibly large bright light glowing from the side of the aircraft.

The plane landed safely. Emergency vehicles were seen on the tarmac of the airport. No injuries were reported.

Dawson told CP24 that the flight caught on CP24 cameras was not suffering from any fuel problem. The aircraft diverted to Toronto because of bad weather in Montreal, he said.

An official with the GTAA agreed the bright light was likely caused by a reflection. He told CP24 that the aircraft would not have been allowed to land close to a terminal if it was on fire.

He said the aircraft would be inspected and certified. 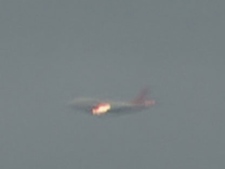 A Sunwing flight prepares for an emergency landing at Pearson International Airport. The plane appears to be on fire.