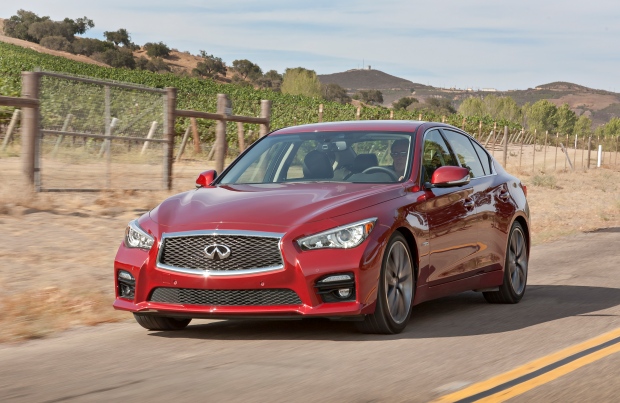 The outgoing Infiniti G37 was never my favorite sport sedan. Sure, it was an entertaining drive when you really pushed it. And in terms of performance, value, and even long-term reliability, it had many of its German competitors beat. The problem for me was that it ultimately lacked the zing, that special something, that ultimately makes a BMW 3-Series slightly more desirable. That may not sound like anything worth sweating about, but in a segment as competitive as the entry-level luxury sedan, it could mean make or break an identity-lacking brand like Infiniti.

Fortunately, the G37 had been replaced by the Q50, and immediately, it looks to be a more serious effort. It has a handsome look that makes the G37 look bland and somewhat anonymous. It has a headline-grabbing electric steering system, Direct Adaptive Steering, which will one day see use in autonomous driving cars. And it can be optioned with enough electronic safety aids to make you think that it can already drive itself.

Take the Lane Departure Prevention system. It can sense unintended lane drifting and automatically nudge the car back to the center of the lane. Or the Predictive Forward Collision Warning system, which can not only anticipate and warn you if the car in front of you is slamming the brakes, but also the car ahead of it. These are but a few of the clever, if somewhat superfluous, safety technologies that are available in the Q50.

None of these features, however, are likely to dazzle you quite like the performance will. My test car had the optional hybrid drivetrain, which combines Infiniti’s workhorse 3.7L V6 engine with a small, fuel efficiency boosting, electric motor, for a total system output of 360hp. The power is seriously impressive, and when you’re not hammering it, so is the fuel economy. In the city, it will do 9.0L/100km in Eco mode, which is quite good when you consider that the regular Q50 would struggle to do 12.0L/100km. The only downside to the hybrid, aside from a price premium, is the reduced trunk space due to the battery pack.

The list of positives goes on and on.  The Q50 handles and rides beautifully. The responsiveness of the electric steering is sports car-like. The dual touch screen, infotainment system is a breeze to use. It’s an Infiniti, so it should be extremely well made and long lasting. And, although my loaded up Hybrid model carries a substantial MSRP of $56,450, a well-equipped, non-hybrid Premium AWD model, complete with a punchy 328hp V6 engine, can be had for a measly $43,400. Just about anything else comparably equipped will cost you more.

If you’re looking to buy an entry-level luxury, sport sedan, there’s no doubt that you’re spoiled for choice. The Lexus IS350 and BMW 335i are both sublime, and the new 2015 Mercedes-Benz C-Class looks to be right up there with them. Each one of them may offer a little more here and there in terms of sportiness, luxury, or just sheer desirability.  None of them, however, can quite match the Q50’s blend of value, sports car thrust, and premium features. If you’re looking for a fine sport sedan that’s also sensibly priced, the Q50 is a fine choice.