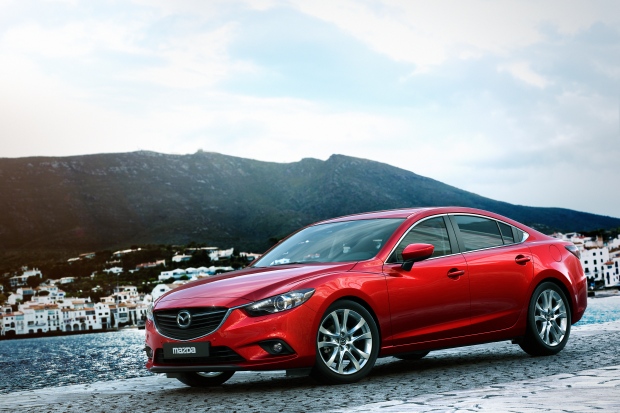 The outgoing Mazda6 hasn’t exactly been the go-to choice when shopping for a midsized sedan. The problem, I thought, was that it was too much of a “me too” car, and as a result, it didn’t really have any outstanding qualities that would justify choosing it over, say, the well-established Accord, Camry, or Altima. Well, fortunately, things have changed, and the completely new 2014 Mazda6 is giving you several reasons why we should start thinking differently.

First off, there is the styling, which, next to the Ford Fusion, is likely one of the most visually striking in its price bracket. The deep red colour in particular that my test car came in does a brilliant job of accentuating all of the handsome design cues and the sporty coupe(ish) profile. The trade-off for all that handsomeness, however, is less rear seat headroom than the norm. Legroom and overall spaciousness is very good otherwise. The trunk too should be able to swallow most things that a family can throw in it.

I wish Mazda put as much effort into making the interior feel as special as the exterior. Unless you go with the stunning off-white against black leather which looks as though it was pulled from a high-end Audi, the inside will probably come off as a bit dull. That being said, the materials and build quality appear to be top-notch. All of the controls and buttons have a certain weighty feel to them that gives off the impression that they’ll stand up well to many years of use, not to mention all being very user-friendly.

Like the recently introduced CX-5, the Mazda6 benefits from a number of innovations crafted under Mazda’s SkyActiv program. One of those benefits is a light-weight, yet super stiff, chassis that that not only aids fuel economy, but gives the Mazda6 a level of agility and handling ability a cut above the other midsized offerings. It’s a genuinely fun car to toss around when you feel like pushing it, yet still manages to feel compliant and serene when you don’t.

Perhaps the best indication that the Mazda6 is well-suited to the driving enthusiasts is the availability of a sweet-shifting manual gearbox on every trim level (A smooth 6-speed automatic transmission is also available). In addition to upping the level of driver involvement, the manual helps extract the best fuel economy from the refined, 2.5L, 4-cylinder engine. I was able to average as little as 6.0L/100km on the highway without even trying. As a matter of fact, I found this engine to be so efficient, that I’d probably pass on the soon-to-come diesel engine option that promises to be even more frugal. It’s nice to see a diesel as an option, but I can do without the higher initial expense as well as the potentially higher repair costs down the road typically associated with this engine type.

Pricing for the Mazda6 starts at $24,495 for the entry GX model and climbs to $34,195 for the top of the range GT model with the Technology Package. All models come well equipped, but if it were me, I’d go with the $28,395 midrange GS model, which includes niceties like a sunroof, climate control, backup camera, and blind spot monitor. To that I’d add the bargain-priced Luxury Package, which, for $1800, adds a navigation system, and finely trimmed leather seats with 8-way power driver seat adjustment.

The mainstream midsized sedan segment is filled with so many fantastic choices that it’s hard to go wrong. But the new Mazda6 is a true standout. It manages to blend efficiency, refinement, and fine driving dynamics into a stylish, usable, and affordable package. It feels so polished and well executed in fact, that it almost feels like a contender for some entry-level premium sport sedans, like the BMW 320i, rather than its more obvious mainstream rivals, and that probably says it all. So if you’re a keen driver who has been relegated to family driving duties, fear not, because Mazda has the perfect car for you. 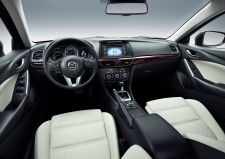