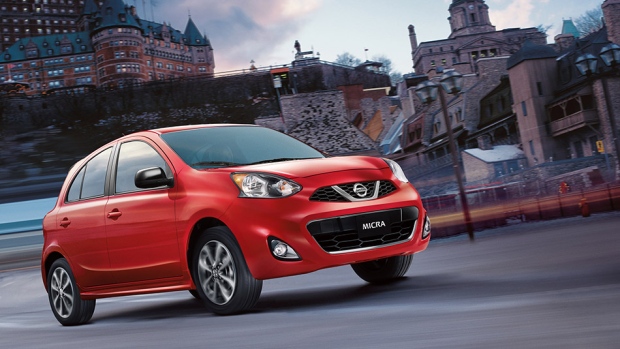 Let’s get this out of the way right off the top. Nissan’s new-to-Canada Micra has a base MSRP of $9,998, and don’t let that deceivingly low price fool you. It is simply impossible to drive off a dealer lot in a brand new, four figure-priced car. Once you’ve added in all the necessary fees and taxes, you’ll be leaving the dealership in a hatchback priced at no less than 13 grand. And even if it can be had for that price, how many people are willing to go for a car with windup windows, manual door locks, no air conditioning, and a row-your-own manual gearbox?

Although the Micra isn’t a sub-$10,000 car, it is still quite cheap by contemporary standards. Once you’ve added in options such as an automatic transmission, air conditioning, Bluetooth, cruise control, and power this and that, you’ll be looking at a reasonable MSRP of $14,698. Really, even at that price, the only transportation choices cheaper than a Micra would be a used car, public transit, or something with fewer wheels.

What’s also nice about the Micra is that it really doesn’t give off the impression of car that costs about as much as two top-notch bicycles. Take the interior. Sure, most of the parts feel as though they’ve been constructed using the plastics of dollar store toys, but if you poke and pull at the all of the bits, you’ll find that everything is well put together. The fact that it comes standard with seven airbags, along with the mandatory traction and stability control safety nets is quite reassuring as well.

As a driving tool, the Micra doesn’t really excel in any particular area, but it doesn’t offend either. Engine wise, it uses the same 116hp, 4-cylinder unit from the Versa Note. It’s enough to give the smaller and lighter Micra a fairly zippy feel. It’s also a breeze to park and perform U-turns with on narrow roads.

There’s more good news. It has four doors and a decent trunk. It can seat five in a pinch. It costs little to run, and, thanks to its overall simplicity and Japanese-backed reputation for reliability, should cost little to repair overall the long-haul.

Here’s the issue though. As it sits, the Micra’s MSRP makes it roughly $2,500 cheaper than comparably equipped, but slightly larger hatchbacks such as the Honda Fit, Toyota Yaris, Ford Fiesta, Hyundai Accent, and indeed, Nissan’s own Versa Note. $2,500 is a substantial saving for someone with a budget under 20 grand. The issue is that many of the listed models are regularly offered with cash incentives that bring their prices more in line with that of the Micra. Indeed, at the time of this writing, Nissan is offering a $1,850 cash purchase incentive on the Versa Note. For about the same price, which would you rather take?

For some, however, part of the Micra’s attraction will not just be its low price point, but also its fairly extensive list of financing options. Many of these programs are designed to make the Micra accessible to a range of consumers far wider than the norm. The Opportunity Program, for example, is designed to accommodate consumers with poor credit history who would otherwise likely have to settle for a costly subprime loan, or a used car of questionable quality.  Other similar financing programs for the Micra include the First Time Buyers Program and the New Canadian Program.

Although the Micra, in some ways, comes off as a car for those with few other options, that doesn’t, by any means, make it an unattractive car. On the contrary, the Micra is something of an achievement.

Nissan smartly chose to skip to costly, but ultimately superfluous “upscale” details that small cars typically get nailed for by journalists these days, and instead has honed in on the things that matter the most to consumers: durability, efficiency, safety, space, and performance. And they’ve done it all at a price that, though not four-figure, is incredibly affordable. The Micra is proof that, when it comes to automobile purchases, we are all deserving of a quality product, regardless of the amount of money paid. That’s certainly something that could not have been said about entry-level cars in the past, and even a few of the present (I’m looking at you Mitsubishi Mirage). There’s no question, what Nissan has achieved with the Micra is absolutely praise-worthy. It’s good to be cheap.