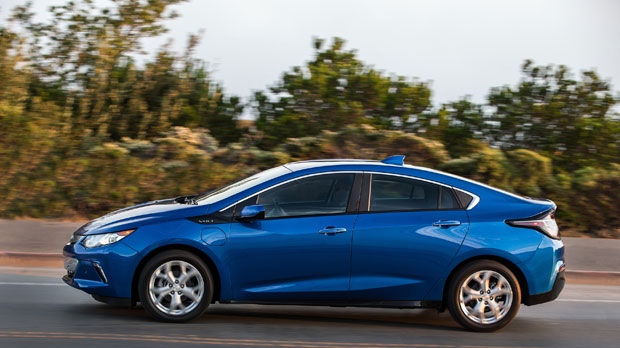 Rarely in the automotive industry does a new car get to be the first of its kind. As far as plug-in hybrid vehicles go, few would argue that the Chevrolet Volt set the stage. Years of sketches, prototypes, bankruptcy, restructuring, and, well, let’s just call it headache, though as sceptical as it may seem, resulted in GM creating something no short of a technological marvel.

The Volt possesses some of the cleverest technology on the automotive scene. Its propulsion system consists of a lithium ion battery powered electric drivetrain, which is assisted by a small gasoline engine. This system allows the Volt to operate like any one of the plug-in electric cars popping up on the market, but with the added benefit of being able gas up when the electricity runs out, thus, eliminating the so-called “range anxiety” associated with full electric cars.

The high-tech motif carries on to the inside of the car. Traditional gauges are non-existent. The Volt uses two screens, one driver-mounted and one centre-mounted, to display information such as speed, fuel economy, battery life, range, charge times, audio and climate information, among other things. Fortunately, there are a good number of traditional, user-friendly buttons and knobs to work the frequently used sound system and climate controls. Spaciousness is quite good for four, and Chevrolet has even added a fifth seatbelt in the back for added practicality.

Perhaps GM’s greatest success with the Volt is the way it drives. Acceleration is brisk, and it take corners with little fuss, but the real pièce de résistance is the refinement. Not only is it completely solid, free of any rattles or shakes, it operates in near total silence. It doesn’t matter whether you drive it 50km/h or 150km/h, the Volt barley makes a peep. As strange as it may be to drive a silent car, I must admit, there’s an almost Zen-like, even therapeutic, quality to driving a car that makes no noise. It’s refinement at its best.

The soundless, all electric, operation lasted for about 70 kilometres in my test car, at which point the gasoline engine kicked in to sustain the drive. The quiet 4-cylinder engine gives the Volt an additional 450 kilometres or so of range, making the total range on one charge and fill up comparable to that of many other cars. For those who plan to drive their Volt in all-electric mode most of the time, an automated maintenance system will periodically run the gas engine to promote its long-term reliability. Furthermore, the Volt reportedly has a fully sealed gas tank to help prevent the gasoline from going stale when not in use.

Under the Volt’s trunk floor is a small storage compartment that holds a charging cable that plugs into a 110V outlet. The charging process is straightforward and takes about 13 hours. For those who want a speedier charge time, a 240V charging option is available that cuts the time down to around 4 hours. Various smartphone apps are available to aid with optimizing charge times and to locate charging stations, which should be of great help until the stations become as common as fire hydrants.

The biggest drawback with the Volt is its price. The MSRP starts at $38,390 before government incentives (up to $8,500 in Ontario). That’s quite a bit more than a comparable Chevrolet Cruze, a car on which the Volt is based. If the ultimate goal is to save money both initially and over the long haul, then a traditional, economical gasoline car, like the Honda Civic, arguably makes more sense.

The Volt is without a doubt an outstanding technological achievement, and a champion of ingenuity and innovation. Despite its complexity, it has also proven to be one of GM’s most reliable, well-built vehicles, according to sources like Consumer Reports and True Delta. If you’re will to pay the price, it is an excellent gateway into the world of electric motoring.