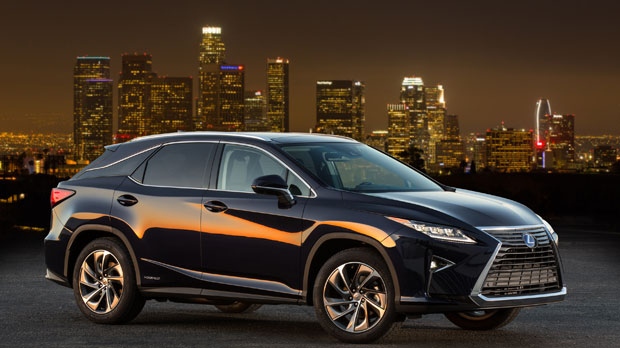 The first generation RX, introduced in 1999, was a pioneer of the popular luxury crossover segment. The concept of a luxury vehicle with the looks of an SUV, but with the on-road manners of a sedan, proved to be a huge hit. The last two generations of RX, however, have failed to significantly move the bar forward. Now though, the RX has undergone a dramatic transformation, complete with bold styling, a lavish interior, and even a few sporty trimmings, in an effort to reaffirm its hold on the luxury crossover segment.

The RX employs the same dramatic angular styling and spindle grill seen on the rest of the Lexus range. Though some may find it polarizing, I find it to be a very handsome design. It’s striking, but not over the top like the smaller, Etch a Sketch angular NX crossover. The interior too is quite stylish. It’s reminiscent of a BMW with a centre stack angled towards the driver and a large tablet-like display popping out of the dashboard. Just about everything within reach is covered in high-quality materials and feels good to the touch. The one knock I have is the mouse-like cursor used to control the large central display screen, which is both frustrating and distracting to use on the move.

Despite its relatively large size, Lexus has resisted the urge to squeeze in a third row of seats. Instead, the RX remains one of the most comfortable and spacious five-seaters on the market. Rear seat space is plentiful, with the unique available feature of power reclining rear seatbacks, plus a dual-screen HDMI entertainment system. Other notable options include wireless phone charging, a colour head-up display, 15 speaker Mark Levinson sound system, and several of the latest active safety technologies.

Also available is the F Sport package, which combines several cosmetic bits with adaptive air suspension, in an effort to add a bit of sporty zest to the driving feel. Aesthetically, it’s a nice package, but I’d still pass on it. The RX is no corner-carving performance vehicle, and there’s no reason for it to pretend to be one. Even off-roading is best left to the larger, Land Cruiser derived, LX570. What the RX is best at is an old Lexus signature dish of melting away the kilometres with a pillowy soft ride and a perfectly serene cabin.

The RX continues to offer an efficient Hybrid drivetrain, as well as the popular 3.5L V6 engine matched to a new 8-speed automatic transmission. Turbocharging and stop/start technology may be the trend, but I prefer the RX’s way, which is to use well-proven, easy to maintain, reliable drivetrains. The Lexus V6 in particular is a stout unit that combines reasonable, though not class-leading, levels of performance and fuel efficiency. My hybrid tester averaged a very reasonable 9.0L/100km over one week of mostly city driving.

With an MSRP that ranges from $53,950 for a base RX350, to $77,550 for a fully equipped RX450h, the RX is priced to compete with the best that the market has to offer, which includes the Acura MDX, BMW X5, and Jaguar F-Pace. Few competitors, however, are as well-rounded as the RX, especially when you factor in its peerless, no nonsense reliability, impeccable build quality, and stellar resale value. The RX has improved on just about everything, while carrying forward its strong suits, a formula which makes it an easy pick among luxury crossovers.