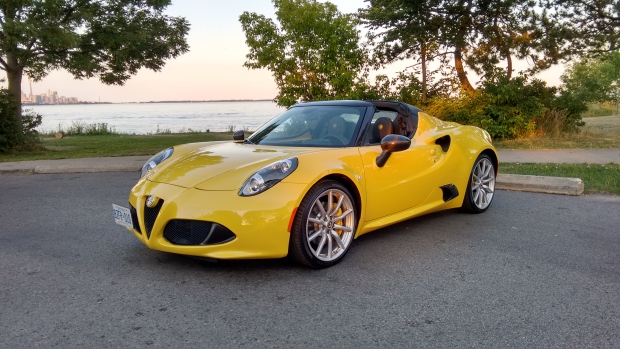 When you’re an unfamiliar face and going up against a herd of well-established luxury brands, a mass-market friendly, but yawn-inducing, sedan or crossover just isn’t going to cut it for an attention-grabbing grand entry. What’s needed is something eye-catching, unique, and maybe just a little bit crazy. What’s needed is something like the 4C, a car so different from everything else that it couldn’t attract more attention even if Donald Trump’s head came attached to the roof. Alfa Romeo is back baby.

The 4C has been described by many as a scaled-down supercar. Its breathtaking looks certainly attract the attention of one. It looks like nothing else, and it’s likely the most exotic car you’re find for less than 100 grand. It is hand built in Italy at Maserati’s Modena plant.  The chassis is a full carbon fibre monocoque that contributes to a ridiculously low curb weight of only 1,118kg. The engine is mid-mounted like a supercar, and the steering is completely unassisted.

The result is a driving experience that’s totally raw, organic, and unfiltered. Every component, from the chassis to the steering, feels hardwired to the driver to the point of sensory overload. It’s a bit much on decaying city streets where the heavy hyperactive steering, firm ride and various noises can get wearisome. Driven on the right roads, however, the 4C comes alive, delivering incredible agility and poise. Still, it demands constant attention and vigilance, especially near the limit of grip where it can be a bit frenetic.

The 4C makes no apologies for the fact that its engine is turbocharged. The optional sport exhaust is basically an open straight pipe, blasting out a dramatic blend of turbo wailing, whistling, and snorting with each gear change as the speed climbs. There’s a little lag in the lower rev range, but that’s quickly forgiven when the boost hits and you get shoved into your seat from the hard-hitting acceleration. It would be nice to have the option of a proper manual gearbox in a car that’s so involving to drive. The paddle-shift gearbox offers quick gear changes in race/manual mode, but stumbles a bit when left to do its own thing.

The 4C has a base MSRP of $66,495 for the Coupe and $78,495 for the Spider. Far from cheap, but still quite a bargain for what is, essentially, a hand-built, exotic, Italian sports car. A Porsche 718 Boxster or Cayman can be had for similar money, but they lack the uniqueness, sense of occasion, and raw thrills offered by the Alfa. 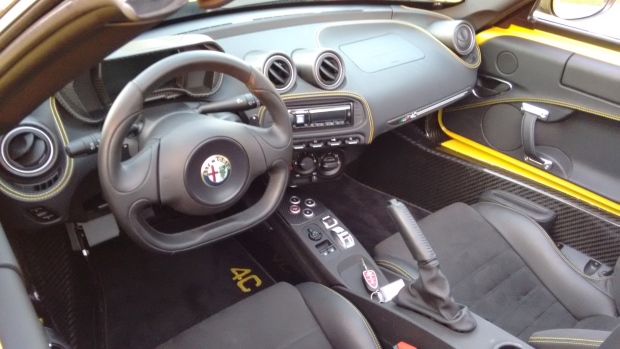 Those raw thrills, however, come at a price. The interior has plenty of nice leather around and some very cool floor-mounted aluminum pedals, but everything goes downhill from there. The lightweight seats are rock-hard and have very little adjustment. They aren’t as painful, however, as the tricky maneuvering that’s required to fall into them. Rearward visibility is limited to say the least. And the lack of amenities is only matched by the lack of any kind of storage space. That’s enough for now.

The 4C is very much a modern take on an old-school formula for a sports car. In a world where sports cars have evolved into instruments of refinement, the 4C is unapologetically uncompromising, placing stylishness and performance above all else. It’s incredibly soulful and hardcore, and for that, it must be celebrated. Like the great Italian supercars of old, it’s terrible at being a transportation device, yet it excels at being an object of desire. If Alfa Romeo can manage to distill a bit of the 4C’s charisma into its soon-to-come sedans and crossovers, its model lineup should be very special.