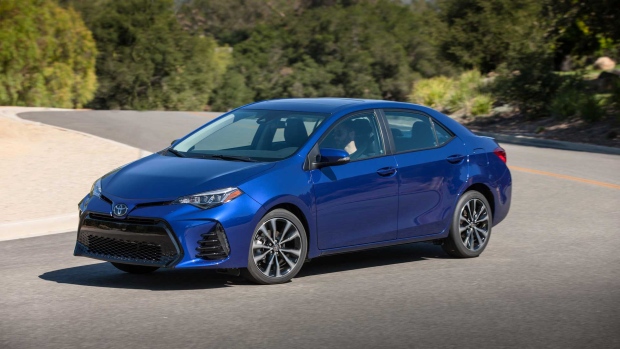 The Corolla is, in many ways, the essence of a car. It is completely free of any flim-flam, character, or anything really that makes a car into more than just a transportation device. It is just a tool doing its intended function: transporting people from point A to point B.

The simple-minded formula seems to be spot-on, because the Corolla is one of the world’s best-selling cars. It’s so successful and well regarded that Toyota really doesn’t need to put much effort into redesigning it at all. Regardless of how boring it looks or drives, the Corolla is incredibly reliable, affordable, overall, a sensible automobile. For many, that’s enough reason to buy one.

The mechanical bits are a great example of don’t fix what isn’t broken. The Corolla uses the same simple, yet robust, 1.8L 4-cylinder engine that it has had for ages. The benefit of this naturally-aspirated unit is lower long-term repair costs than a trendier, but more complicated, turbocharged engine. Same goes for the front strut rear torsion-beam suspension, which is a simple setup in comparison to the multi-link suspension arrangements found on many rivals. Just about the only mechanical bit that’s a concession to modern times is the available CVT automatic transmission, which is a more fuel efficient alternative to a traditional multi-gear unit.

The result, unsurprisingly, is a driving experience that does the job just fine, but doesn’t excel in any particular area. The engine’s 132 horsepower is adequate, but significantly down on power compared to many rivals such as the Honda Civic and Mazda 3. Both rivals also have excellent steering, braking, and body control during hard cornering, all of which feel nowhere near as sharp on the Corolla. The suspension is supple enough on smoother roads, but broken asphalt upsets it quite a bit. The Hyundai Elantra and Chevrolet Cruze, both of which have excellent ride quality and noise suppression, are not bothered by rough roads in the least.

It may sound like I’m having a downer on this car, but the truth is that, even though it lags behind its competitors in many areas, the Corolla is, again, one of the safest, most economical, most reliable choices one can make. Its blandness is a product of its long-trusted, straightforward, no nonsense engineering. It is a formula that works, and it works well.

It’s even something of a bargain. Where most rivals can top 30 grand with every optioned ticked, a fully-equipped Corolla XSE has an MSRP of only $25,210. Every Corolla from the $16,290 base CE model up even comes standard with a Toyota Safety Sense package which includes a Pre-Collision System, Lane Departure Alert, LED headlights with Automatic High Beam, and Dynamic Radar Cruise Control. Those are all extra-cost options on many six figure-priced cars.

At the end of the day, and getting back to my initial point, the Corolla is one of the most all-around cost effective cars one can buy. That makes it, by any rational method of analysis, a great car. And that reality somehow makes any cosmetic or dynamic deficiencies look kind of petty and irrelevant. There are rivals that look better and drive better. But for the vast majority of budget-minded consumers, who just want an affordable car that they can count on for the next 15 years or so, I would be hard-pressed to recommend much else. The Corolla is one of the very best where it matters most, and that’s what makes it such a success.