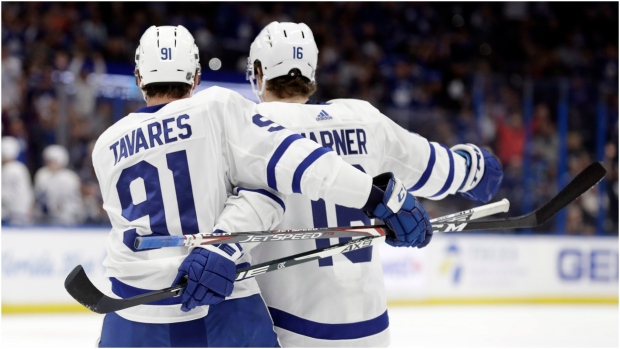 One game after losing to a 42-year-old emergency goaltender on home ice, the Toronto Maple Leafs found redemption on the road with a 4-3 victory against the Tampa Bay Lightning on Tuesday night.

John Tavares scored twice, William Nylander scored his 28th and Fredrik Andersen stopped 26 shots for Toronto. Jake Muzzin also scored, though he missed the third period after taking a puck off his right hand late in the second period.

Toronto scored a pair of power play goals while killing off all three Lightning chances, holding Tampa Bay to one shot.

Nikita Kucherov scored his 30th of the season, Pat Maroon notched his eighth while Yanni Gourde picked up his ninth as Tampa Bay lost its season-long third consecutive game in regulation and had an 11-game home winning streak ended.

Lightning captain Steven Stamkos left the game after the second period and did not return for undisclosed reasons.

Kucherov put Tampa Bay in front at 9:45, one-timing a feed from Steven Stamkos, who shook Toronto defenceman Rasmus Sandin loose to open the lane for the pass.

The Maple Leafs responded at 12:48 as Muzzin, who signed a four-year contract extension on Monday, stepped into a loose puck from the centre point that hit Vasilevskiy in the glove and dropped in off the bottom of the cross bar to tie the game.

Tavares tipped a Tyson Barrie shot from the centre point on the power play to put Toronto in front at 16:42. Nylander scored a between-the-legs goal at the top of the crease on the power play at 14:21 to give Toronto a 4-2 lead.

Tampa Bay cut the deficit to one goal when Kevin Shattenkirk's rebound bounced off Gourde into the net at 7:27 of the third period.