OTTAWA - The Canadian Taxpayers Federation aimed a broadside at Defence Minister Peter MacKay on Thursday, accusing him of living like a king while attending conferences in Europe.

The watchdog group said it used access-to-information requests to uncover hotel bills that show the minister spent $1,452 a night for a two-night stay at a luxury hotel in Munich and $770 a night for three nights in Istanbul, Turkey.

Gregory Thomas, national director of the taxpayers group, says the bills go beyond what most people would consider reasonable.

He pointed out that the minister's staff had rooms in another Munich hotel for $276 a night.

But the federation's complaints may be misdirected.

MacKay was attending an annual security conference, which was held at Munich's Hotel Bayerischer Hof in February 2010.

Senior federal officials, speaking on background, said MacKay stayed at the hotel at the request of the German government, along with all other heads of delegation.

"The organizers wanted and insisted upon that," said a Foreign Affairs source familiar with the trip.

Thomas said his group decided to file an access request for MacKay's expenses after it was revealed in September the minister had an air force helicopter pick him up from a Newfoundland fishing lodge.

"If you don't want to attract attention to your expenses, don't get search-and-rescue helicopters to pick you up from your fishing trip," Thomas said. "We saw that and it made us curious. So, going on the basis there's never only one cockroach, we just thought we'd, you know, look at some of the other, some of the minister's other travel expenses and that kind of thing."

A package of documents was released to the federation early this month. Thomas said the group is still analysing the data and will release more information soon.

He denies that his group, which counts Immigration Minister Jason Kenney among its former directors, is singling anyone out.

He says the federation has requests in on other ministers as well, but refused to say who else is being put under the microscope.

"You have to focus your attention somewhere and this just seemed like a obvious place to look," he said.

Thomas says cabinet ministers shouldn't be expected to stay in "dumps" when they travel, but the federation believes MacKay could have gotten a room at another hotel where his staff was housed.

But a spokesman for MacKay noted that having the minister in the same hotel as other heads of delegation is standard practice.

"Nation-to-nation meetings that take place at these conferences advance Canadian interests and activities -- including the work of our men and women serving in Afghanistan," said Jay Paxton.

The expenses of cabinet ministers and their staff are regularly posted online and Paxton noted details of the trip were disclosed almost two years ago.

Thomas said the federation decided to use the access law because that offered more details.

MacKay has been hammered repeatedly over his travels, leaving some to wonder if there is a move afoot to undercut him.

There have been questions about his use of the government's Challenger jets as well as a Cormorant helicopter flight to Gander, N.L. in the summer of 2010, following a vacation with friends.

In September, MacKay insisted in the House of Commons that the trip from the fishing lodge was the result of a long-standing air force offer to take him on a helicopter search-and-rescue demonstration.

The controversy re-ignited when The Toronto Star published internal air force memos saying the flight was ordered by the minister's office and was under the "guise" of an exercise.

Two air force members -- one current, the other retired -- stepped forward last week to defend MacKay and say the flight was justified.

Opposition parties spent days attacking MacKay in the Commons and demanded his resignation.

Prime Minister Stephen Harper brushed off the attacks, saying MacKay did nothing wrong. 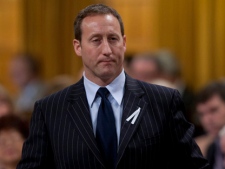 Defence Minister Peter MacKay responds to a question during question period in the House of Commons in Ottawa Tuesday, Dec. 6, 2011. (THE CANADIAN PRESS/Adrian Wyld)