The Toronto District School Board has rejected a proposal to expand a pilot project that places televisions in common areas in high schools.

The televisions, operated by One Stop Media, broadcast student-generated content and advertisements.

The students' exposure to the advertisements, which account for 30 per cent of the overall content, has been the subject of debate and controversy in recent days.

Before the meeting, one school trustee expressed concern that the advertisements may send the wrong message to students.

One Stop Media would have covered the cost of the screens and software, returning five to 15 per cent of advertising income to the board, of the additional televisions. 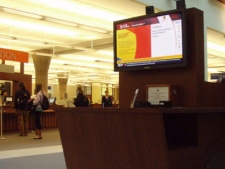