Teen star Selena Gomez has been announced as co-host of next month's MuchMusic Video Awards.

The "Wizards of Waverly Place" star will also perform at the annual street bash, to be held June 19th.

Among her competition at the People's Choice Awards was her boyfriend, Justin Bieber.

The hosting duties will mark the first time Gomez has been to the MuchMusic headquarters.

Among the other scheduled performers is Lady Gaga. A co-host has yet to be announced. 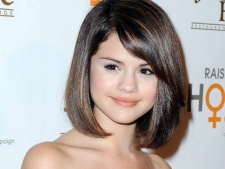