VANCOUVER - Eric Hassli was accurate when he had to be Wednesday night.

Hassli came off the bench and scored a highlight-reel goal in added time to give the Vancouver Whitecaps a 1-1 draw with Toronto FC in the first leg of the Amway Canadian Championship soccer final before a crowd of 14,878 at B.C. Place Stadium.

"I'm a striker," Hassli said. "I have to score. But I'm disappointed for my teammates, because we wanted to win tonight."

The winner of the two-game, total-goals series will represent Canada in North American, Central American and Caribbean zone (CONCACAF) Champions League play. The CONCACAF champion will qualify for the 2013 FIFA Club World Cup.

The second leg goes next Wednesday in Toronto. The Reds are seeking their fourth straight Canadian title, while the Whitecaps are seeking to avenge a loss to TFC in last year's final.

Hassli volleyed in a long cross from Alain Rochat just as four minutes of extra time were announced. It was his fourth goal in five games since he ended a 17-game scoreless drought that dated to last season.

"It was incredible," said Whitecaps coach Martin Rennie. "It was probably too fast for the cameraman to see it."

The tying marker came a day after Hassli practised volleys off corner kicks but fired many shots into the B.C. Place Stadium seats, including one that almost hit Vancouver Province soccer writer Marc Weber as he was working on his laptop.

"I almost killed Marc yesterday," Hassli said. "Alain (Rochat) gave me a great ball, too. You have to be lucky, and I was lucky tonight."

So were the Whitecaps as a group. Until Hassli's goal, it looked like struggling Toronto was going to pull off an upset.

Vancouver, meanwhile, defeated Edmonton by a 5-1 margin in its semifinal and sports a respectable 5-3-2 mark in league play.

"It was tough giving up a goal the way we did," said Ryan Johnson, who scored Toronto's goal in the 66th minute. "But we have a chance to win it at home in front of our fans. That's very good for us."

The Whitecaps pressed in the first 20 minutes, but the Reds kept them hemmed in their half of the pitch for most of the next 25 minutes and much of the second half.

"Overall, it was a good game," Johnson said. "There's been so many negative games this year. It's good to have some good games under your belt."

Toronto had a chance to go up another goal in the 85th minute, but Vancouver goalkeeper Joe Cannon robbed second-half substitute Nick Soolsma from point-blank range.

Rennie said the save could prove crucial. A 2-0 Toronto lead would have made it difficult for the Whitecaps heading into the second leg.

"But getting that equalizer right at the end gives us a much better chance and makes it exciting for next week," Rennie said. "There were spells in the game where we played fine and did some good things, but it wasn't like we were playing excellent."

Toronto was credited with 12 goal attempts compared to 10 for Vancouver. The Reds forced seven corner kicks while the Whitecaps only had three.

"It was a good result," said Toronto coach Aron Winter. "But if you watched the whole game, we deserved to win."

Away goals serve as the first tiebreaker in the series and can help prevent overtime and a penalty-kicks shootout if the score is deadlocked after the second leg. As a result, Johnson was still satisfied even after his club surrendered the equalizer.

"You're playing away from home," Johnson said. "You don't expect to win games like this. You're happy with the tie, especially getting the away goal. You've got to be happy with that."

Rennie attempted to insert more offence as he substituted Hassli in for Etienne Barbara, who generated little in his first start as a Whitecap.

But it was Toronto who scored first as Johnson headed in Julian de Guzman's cross from the corner of the 18-yard box.

However, Hassli, who was denied a goal in a second leg of the 2011 final between these clubs that was abandoned by a sudden storm, had the last laugh.

"It was a great goal," Johnson said. "I was surprised he wasn't starting. ... The quality that he has, he shows it -- and tonight he showed it again."

And Hassli's misses of a day earlier were almost forgotten.

Notes: Toronto midfielder Terry Dunfield, a former Whitecap playing his first game in his hometown since a trade last summer, was cautioned in the 49th minute after he made a hard tackle on Matt Watson, drew a foul and then kicked the ball away. ... Toronto's Jeremy Hall took a yellow card for throwing a hip check on Camilo near the sideline early in the first half. ... Vancouver striker Atiba Harris, recovering from a bruised thigh, did not dress. ... Injured Reds captain Torsten Frings (shoulder) and defender Miguel Aceval (hamstring) did not make the trip west. ... Toronto forward Danny Koevermans dressed as a substitute and played 25 minutes after missing five games with a sore groin suffered in training after an April 14 loss to Chivas USA. ... Reds forward Richard Eckersley served a one-game suspension after taking a direct red card in the second leg of the semifinal win over Montreal. 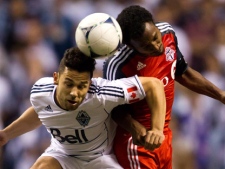 Vancouver Whitecaps player Davide Chiumiento, left, and Toronto FC's Julian de Guzman jump for the ball during the second half of a Canadian Championship soccer game in Vancouver, B.C., on Wednesday, May 16, 2012. (THE CANADIAN PRESS/Darryl Dyck)