Tobacco companies: Smokers have only themselves to blame

MONTREAL - Tobacco companies embroiled in a historic civil suit kicked off the trial Monday by arguing that smokers who get sick or can't kick the habit have nobody to blame but themselves.

The landmark class-action case, with up to $27 billion at stake, kicked off in a Montreal courtroom where Canada's three biggest cigarette companies began their battle against a group representing all of Quebec's 1.8 million smokers.

It is considered the biggest class-action case in Canadian history. It is also the first time tobacco companies have gone to trial in a civil suit in Canada.

Two lawsuits are being heard together and they involve separate groups of Quebec plaintiffs -- some who have gotten seriously ill from smoking, and others who say they can't quit.

The defendants -- Imperial Tobacco Canada Ltd.; Rothmans, Benson & Hedges; and JTI-Macdonald -- were heavily armed with lawyers and pubic-relations staff as the case finally came to trial, 14 years after an initial group of plaintiffs filed a suit.

One by one lawyers made their opening statements, with the companies arguing that the public has known for decades that smoking can be harmful. Tobacco firms also tried shifting blame onto the federal government, which regulates their industry.

The companies said they have always followed federal rules. In recent years, the government has ordered that graphic warnings be placed on packaging and has changed the visibility and marketing rules to curb smoking. One of the lawyers for Imperial pointed to a series of federal government memos from the 1960s that, she said, proved the government was aware smoking was harmful.

"Those who decide to start smoking or continue smoking should assume responsibility for a choice they make -- because no one can say they don't know about the dangers associated with smoking," said lawyer Suzanne Cote, who represents Imperial Tobacco, Canada's largest tobacco firm.

"Everything Imperial Tobacco has done is legal and in large part with guidance from the federal government."

The smokers claim they were duped for years by big tobacco companies who misled the public with slick advertising campaigns, dubious marketing and skewed research.

One of the lead plaintiffs told reporters Monday that she started smoking in the 1960s after being "programmed" by industry TV advertisements that made cigarettes seem cool.

Cecilia Letourneau started smoking at age 19 in 1964. Despite her repeated attempts to quit, she said she hasn't succeeded.

"Smoking was in fashion," Letourneau said in the corridor of the Montreal courthouse.

The Quebec case is being closely watched both in Canada and abroad, said Rob Cunningham of the Canadian Cancer Society.

"It's very difficult for a class action to actually get to trial against the tobacco industry. Very few in the United States or the world have actually gotten to that stage," said Cunnigham, a lawyer.

"The tobacco industry has repeatedly tried to postpone this trial but they have been unable to delay the inevitable forever."

Lawyer Bruce Johnston, who is representing Letourneau, said the industry's attempt to blame the government is a non-starter.

Johnston said it's the companies that are liable -- not the victims or the federal government. He said nothing absolves the companies for putting out a product that, according to him, they knew was harmful but found ways to show otherwise.

"Their strategy is, 'If science is against you, then make your own science,"' said Johnston, who plans to present some 300 documents as part of his case.

The case involving smokers who can't quit seeks $10,000 in compensatory and punitive damages per plaintiff. Johnston said that figure had been carefully calculated.

He cited evidence that shows companies make a one-cent profit per cigarette sold. He said it's also believed that every million cigarettes sold costs one smoker their life.

"That's how they calculate profits in the industry: $10,000 is the price for a human life for them," Johnston said.

But Guy Pratte, a lawyer representing JTI-MacDonald, countered that the case should be about personal responsibility: "Our freedom of choice defines us as human beings, even when those choices seem irrational."

In the United States, the tobacco industry has been walloped with legal bills.

It has resolved actions by the states aimed at recovering tobacco-related health costs under the Tobacco Master Settlement Agreement. That agreement, signed in 1998, calls on the companies to pay a minimum of US$206 billion over 25 years. In 2006, the U.S. government also won a racketeering suit against the major tobacco companies.

So far, legal battles over tobacco have made less waves in Canada.

One other civil case that has been certified stems from a 2003 filing in British Columbia, involving light and mild cigarettes. A trial date hasn't been set in that case and others filed elsewhere in Canada are nowhere near trial. The Quebec case took more than 13 years to make it before a judge after delays, motions and appeals.

Separately, provinces are also seeking the right to pursue tobacco companies to recoup health-care costs. Four provinces have filed: British Columbia, Ontario, New Brunswick and Newfoundland and Labrador. The six others have announced their intention to file.

The Quebec civil trial won't be over for some time. After the plaintiffs make their case, the defendants won't start theirs until 2013. Eventual appeals are inevitable at the end.

Justice Brian Riordan, who is presiding over the trial, addressed the nearly four-dozen lawyers before him ready to argue the case.

"We can know when it starts but we never know what it'll end," Riordan said. "I am confident that, with goodwill and professional pride, we'll see it through to a proper and timely end." 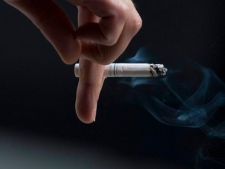