The long-secret records say the "reliable source" of the RCMP Security Service learned from a prominent Montreal activist that Fonda and Douglas, then NDP leader, conversed about smoothing the way for Vietnamese to attend a citizens' inquiry to be held in Quebec.

"Douglas felt that there wouldn't be any problem as long as one started enough in advance."

Fonda -- whose antiwar stance led critics to brand her Hanoi Jane -- also said Douglas told her that Dennis McDermott, then Canadian director of the United Auto Workers, could "help out a lot on peace type of work."

The records are among the latest disclosures from a file amassed by RCMP intelligence officers over a period of more than 40 years. Douglas died of cancer at 81 in 1986.

Widely hailed as the father of medicare for championing universal health services, the pioneering politician was voted the greatest Canadian of all time in a popular CBC contest.

Following a stint as an MP, Douglas became leader of Saskatchewan's Co-operative Commonwealth Federation in 1942, soon heading up the first socialist government in North America.

The freshly disclosed material shows the Mounties took an active interest in the "New Party" clubs that paved the way for the birth of the federal New Democratic Party.

An April 1961 report details an informant's description of a New Party banquet Douglas addressed at the Chateau Laurier hotel in Ottawa four days earlier. The dispatch was filed under the heading "Communist Party of Canada, Supected Closed Clubs" -- suggesting the RCMP had little understanding of the fledgling force in federal politics.

Douglas became the first NDP leader later that year, serving for a decade.

The new papers reveal the Douglas dossier was kept open until at least 1981, three years after he retired as a sitting MP.

The RCMP was responsible for domestic security investigations in Canada until scandals prompted creation of the Canadian Security Intelligence Service in 1984.

The police force created files on hundreds of thousands of Canadians, including left-leaning politicians like Douglas, as well as trade unionists, peace activists, media and numerous organizations and societies suspected of having subversive members.

The latest material about Douglas was released by Library and Archives Canada in response to a Federal Court challenge launched by The Canadian Press in October 2009 to obtain portions of the file withheld by the government.

Following a closed-door hearing in the case last year, the government promised to review the remaining secret pages with an eye to disclosing more information.

Library and Archives released less than half of the 1,142-page Douglas file to The Canadian Press in December 2006 in response to an Access to Information request.

It said the remainder could not be declassified, relying on provisions of the access law that allow agencies to withhold personal information and material that could interfere with Canada's "detection, prevention or suppression of subversive or hostile activities."

The news agency filed a complaint with the federal information commissioner, an ombudsman for users of the law, who took more than two years to decide the material was appropriately under wraps. The Canadian Press then took the matter to the Federal Court.

Summaries of the confidential hearing late last November show Judge Simon Noel questioned whether Library and Archives had released enough of the file given the institution's historical mandate.

The release of new documents comes just days before a public court hearing in the case, to take place Wednesday in Ottawa before Noel.

It is unclear whether the latest disclosure will satisfy the court, as many pages remain blank while others have significant redactions. 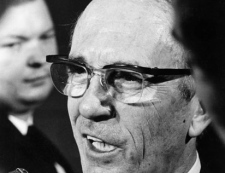 Tommy Douglas speaks to the media in Ottawa on July 25, 1969. The federal government has relented on its adamant refusal to release decades-old intelligence on socialist icon Tommy Douglas. THE CANADIAN PRESS/Chuck Mitchell