With the federal election campaign entering its second week, the Tories are widening their lead over the Liberals in an exclusive opinion poll conducted for CP24, CTV and the Globe and Mail.

Conservative support continues to be driven in Western Canada.

The NDP are third with 16.4 per cent, followed by the Bloc Quebecois at eight per cent and the Green Party with 3.8 per cent.

Seventeen per cent of the 986 people surveyed between Friday and Sunday were undecided. The poll is considered accurate to within 3.1 per cent, 19 times out of 20.

Meanwhile, two of the party leaders are making campaign stops in southern Ontario on Monday.

NDP leader Jack Layton is kicking off his day with an announcement in Toronto at 9 a.m., followed by a rally in London in the afternoon.

Prime Minister Stephen Harper is also looking for support with stops in the St. Catharines area at 10 a.m. and Guelph later in the day.

Liberal leader Michael Ignatieff is spending the day in Atlantic Canada, where he is scheduled to make an announcement in Halifax and attend a rally in St. John's. 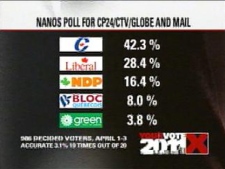 A daily tracking poll by Nanos Research, exclusive to CP24, CTV and the Globe and Mail, reveals the Tories are widening their lead over the Liberals.