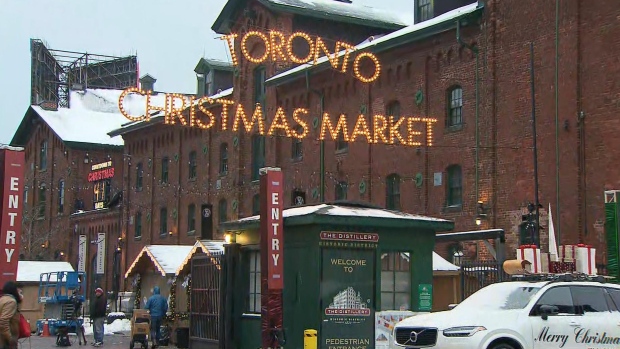 One of Toronto’s most popular Christmas markets will not be taking place this year.

The holiday-themed market located in the city’s Distillery Historic District is the latest event to be cancelled as a result of the COVID-19 pandemic, Toronto Mayor John Tory confirmed on Monday afternoon.

Speaking to reporters, the mayor said the decision was made by organizers amid the growing number of infections being reported by health officials.

“It is one of a number of events at that time of the year that is unfortunately not going to be held,” Tory said.

“It's regrettable, extremely regrettable, because these are things that bring people joy and get them outside even in the colder weather, but a lot of things have changed this year.”

The decision to not hold the market should come as no surprise considering the new gathering limits put in place by the Ontario government over the weekend.

In a rare weekend news conference, Premier Doug Ford said that indoor gatherings across the province must be limited to 10 people. Outside, gatherings of 25 people are allowed as long as physical distancing is maintained.

The Toronto Christmas Market is by far one of the most widely-attended events of the holiday season. According to organizers, more than 700,000 people visit the market during the six-week period it is open.

“Given the pandemic and the number of patrons who attend this event, we regret to advise that, for the first time in 11 years, The Toronto Christmas Market will be cancelled, as the crowds are just too large for safe physical distancing,” organizers said in a statement released Monday afternoon.

“As we continue to work together through these challenging and unprecedented times, the health and well-being of our patrons is of the upmost importance.”

Instead, organizers say the Distillery District will host a “Winter Village” featuring some of the market’s favourite attractions, such as a “grand Christmas tree,” lights and festive music.

The Winter Village is expected to start in early November and run until March.

Tory also said that the city will be providing residents with advice on how to celebrate a safe Thanksgiving and Halloween in a few days.

“It’s very difficult to ban Thanksgiving and ban Halloween. I’m not sure anybody would try to ban them, but I think what you can do is give people the best advice possible on how to keep them safe.”

Both Tory and Ford have expressed concerns about the upcoming holidays, with the premier taking issue with Halloween and trick-or-treating specifically.

“It makes me nervous, kids going door-to-door with this. I would prefer not to,” Ford said earlier this month.

Meanwhile Tory has previously said that he "won’t hesitate" to push for the cancellation of trick-or-treating.

"We don't have the power to just order Halloween cancelled but I can tell you right now if the medical officer of health's advice to me is that I should say to parents you should not go out and you should not be handing out candy and all those kinds of things because we think that it poses a risk, especially with the numbers going up’ I wouldn’t hesitate for a second to do that.”