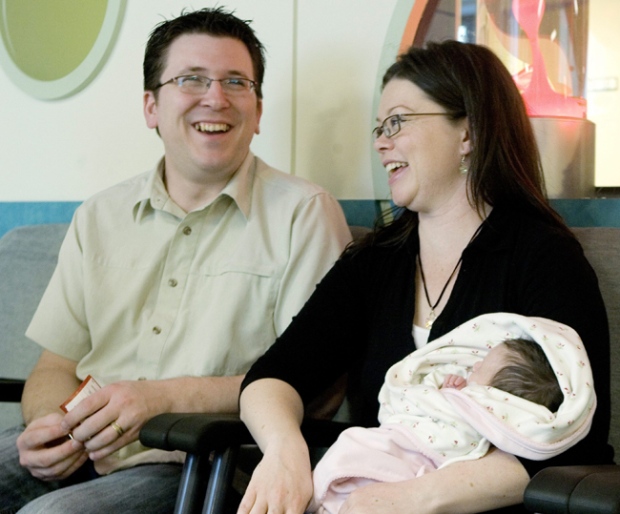 Newborn Oceane McKenzie is held by her mother Vicki who sits next to her husband Ian at Sick Kids Hospital in Toronto on Friday, May 8, 2009. (Chris Young / THE CANADIAN PRESS)

TORONTO - In what's being called a Canadian first, Toronto doctors have successfully performed a life-saving heart procedure on a fetus inside her mother's womb.

A team of doctors at the Hospital for Sick Children and Mount Sinai Hospital used an ultrasound-guided balloon catheter to begin repairing one of the baby's heart valves, which wasn't developing properly.

During the 37-minute procedure, doctors inserted the device through the mother's abdomen and then directly into the baby's heart to induce proper growth and function -- and to prevent the child from dying of heart failure at birth.

At Sick Kids Hospital on Friday, parents Vicki and Ian McKenzie of Gatineau, Que., sat with their children and described themselves as "happy, elated."

"Finally after two months, we can say we're a lot more relaxed and confident that she is going to be home and live a normal life," said Vicki McKenzie, cuddling her three-week-old daughter as sons Gavin, 7, and Owen, 4, played nearby.

"From the moment I found out till about a week ago, I never thought she was going to live. But I do now."

At 30 weeks into her pregnancy, McKenzie had an ultrasound that showed her developing fetus had critical aortic stenosis, a condition in which the main outlet valve of the left ventricle is severely narrowed.

She was immediately referred to Toronto, where doctors at Sick Kids and Mount Sinai explained to the couple that waiting to operate after Oceane's birth would be too risky.

Untreated, her condition would inevitably lead to a lifelong condition called hypoplastic left heart syndrome (HLHS). Children with HLHS typically need to have at least three major heart surgeries and are not expected to have a normal lifespan; the 10-year survival rate is only 65 per cent.

"So what we offered the parents is the intervention where the baby's still in the womb," said Dr. Edgar Jaeggi, head of the fetal cardiac program at Sick Kids. "It's a very high-risk procedure to do after birth, and we felt it was better to do during the pregnancy."

"It can only be offered to a few babies in utero who are detected at the correct stage and when their aorta hasn't yet narrowed too much. This baby came to us at just the right time," said Jaeggi, explaining that Vicki McKenzie was 31 weeks pregnant when the operation was performed.

The procedure allowed Oceane to remain safely in her mother's womb for a crucial extra month until delivery.

Dr. Greg Ryan, chief of the fetal medicine unit at Mount Sinai, said the operation offers little danger to the mother, although it can pose significant risks to the fetus.

"You could kill the baby, the baby could bleed to death, the baby could go into an irregular heartbeat," explained Ryan, adding that the doctors are excited and heartened by the successful outcome.

"I think it opens up all sorts of opportunities for the future ... it's something we can offer to other babies," he said. "I think the important thing is getting the message out to the referring physicians that this is something that's now available in Canada."

The in-utero procedure, called balloon dilation of critical aortic stenosis in the fetus, has been tried by only a few centres in the world.

Previous attempts by the Toronto team to perform the procedure on other fetuses with more advanced valve abnormalities were not successful and the babies did not survive.

Within an hour of Oceane's birth at Mount Sinai, the tiny baby was whisked to nearby Sick Kids, where doctors fed another balloon catheter into her heart to further expand the aortic valve. A third followed a couple of weeks later.

Once the infant is discharged from Sick Kids, she will be transferred to the Children's Hospital of Eastern Ontario in Ottawa, where her condition will be monitored until doctors feel she is well enough to go home, Ian McKenzie said.

"With all the stresses we've gone through, there is a positive outcome to this," he said. "So we're definitely happy with what's happened, with what they've bee able to do for us."

The couple said they are extremely grateful to the doctors and other staff who saved their daughter's life.

"Modern science, modern medicine is amazing," said Vicki McKenzie. "And we're so happy it was able to give us a chance to be a family of five."