TORONTO - Toronto's recent gun amnesty program, dubbed Pixels for Pistols, is being called a resounding success after bringing in about 1,900 guns.

The program, in which residents traded in guns for digital cameras, also yielded about 60,000 bullets.

Sgt. Chris Boddy, who headed the program, says the last amnesty in 2005 yielded just 250 firearms and less than 20,000 bullets.

One middle-aged collector alone handed in 20 handguns from the steel-fortified gun room in his Toronto home.

All of the guns legally registered and acquired over a lifetime, but the unidentified man said many weren't worth keeping.

The digital cameras, and lessons for those who want them, are being given away by the Henry's chain. 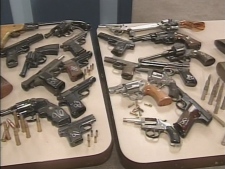 On Thursday, Nov. 6, 2008, Toronto police display some of the firearms turned in so far during the 'Pixels for Pistols' amnesty program.