TORONTO - Toronto newscaster Mark Dailey, once the well-known, baritone voice of Citytv, has died of cancer at age 57.

Dailey, who was born in Youngstown, Ohio, died in hospital Monday afternoon with his family at his side.

Dailey was the host of 11 p.m. CityNews newscasts and enjoyed a reputation for playful teasers to late night movies.

He was most known for the slogan: "Citytv. Everywhere."

Dailey worked as a police officer in Ohio, and became a crime reporter for stations in Ohio and at CKLW in Windsor, Ont., before moving to Toronto in 1974.

Citytv spokesman Gord Martineau says Dailey was "a true professional" and will be greatly missed.

After successfully beating prostate cancer six years ago, Dailey announced in September that cancer had spread to his kidneys. He had surgery in October, but the disease spread to his lungs and the rest of his body.

He died today at Sunnybrook hospital.

"We always leaned on him over the years for a sense of perspective," Martineau said.

"Whenever we had a live shot doing anything, no matter what the story was, you could totally rely on him. He was rock-solid."

Dailey is survived by his wife, Kim, and daughter Nicole. 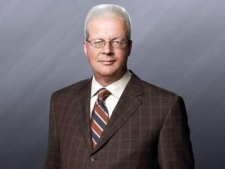