TORONTO - Toronto police have made an arrest in the shooting death of a 19-year-old man in the city's north end earlier this month.

Jaivoan Cromwell was found collapsed with a gunshot wound on the night of April 12 and later died of his injuries in hospital.

The shooting occurred on Woolner Avenue, near Jane Street and St. Clair Avenue.

Police say they have arrested a 17-year-old suspect.

However, the suspect in this case had been previously identified in news reports after police said they sought judicial authorization to temporarily identify him while at large.

Police said the authorization would expire upon arrest or at 8:30 a.m. April 24, whichever came first. 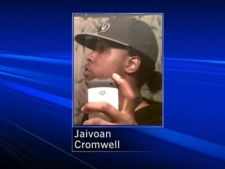