The smell of spring wasn't so sweet for residents in Canada's largest city Wednesday as they woke up to a foul stink in the air.

Grossed out Torontonians -- and people in surrounding communities who also noticed the nasty smell -- took their disgust to Twitter, speculating that the cause of the stench could be everything from doggy doo to sewage to rotten milk.

But environment officials soon cleared up the confusion, blaming the spring thaw for the unpleasant odour.

"The manure smell or the organic type smell ... that is common to this time of year when we see the temperatures warming up, the ground's getting softer, leaves are decomposing," said Kate Jordan of Ontario's Ministry of the Environment.

It's the second time in two weeks that a pungent aroma has invaded Toronto. A similar stench wafted through the city in late April but was never identified.

One person tweeted the misspelled warning "Everyone plug there nose TO's BO is back" while another wrote "Dear .Toronto, why do you smell like a litter box?"

Twitter complaints about the smell came from across the Greater Toronto Area.

Several people likened the odour to everyone stepping in dog poop while one quipped "Toronto smell trackers, .PooTO is your hashtag of the day."

Officials at the mayor's office said the city was looking into what caused the smell while Toronto's water department investigated its systems and said everything was "operating normally."

"There's nothing within our systems that would indicate the odour's coming from us," said spokeswoman Cheryl San Juan.

The department notified the Ministry of the Environment's spills hotline about the odour because there were a number of complaints, she added.

Environmental officers went out and conducted a "sniff test" in several areas of Toronto but none of the inspectors detected the smell, Jordan said.

"Given the kind of area that's complained, and the type of smells they're reporting it wouldn't be uncommon to be attributed to the spring thaw," she said.

Environment Canada's David Phillips said he was mystified how anyone could smell anything in the air, given the winds from the east were moderately strong and mixing.

"They always say if a wind from the east is never good for man nor beast," said Phillips. "It typically means something more than just smells." 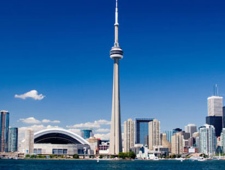