The age-old tradition of school kids choosing to play pickup soccer or football over their lunch hour and during recess will come to an abrupt end at an east-end school.

Citing safety concerns officials at Earl Beatty Jr. and Sr. Public School have banned the use of "hard balls" such as soccer balls, footballs, volleyballs or tennis balls.

The school issued a letter to parents Monday explaining the new regulation.

"These past few weeks, we have had a few serious incidents of parents, staff and students being hit by a hard ball or nearly being hit by a hard ball in our schoolyard," the letter reads. "Despite attempts to control the use of soccer balls, footballs, volleyballs and tennis balls, and several requests to our students to be careful and mindful of bystanders, we have not been able to ensure the safety of all students and adults."

The letter goes on to state that "hard balls" will be confiscated from students who bring them onto school property.

Softer balls, like Nerf balls or sponge balls, will still be allowed.

Alicia Fernandez, principal of Earl Beatty Jr. and Sr. Public School, told CP24 the ban is a temporary one.

She said she decided action was required when a parent was seriously injured by an errant ball on Nov. 2.

"I know students are not happy about it, but we do have to find a way to make it safe for all," she said. "This is temporary. We really want to consult with community, staff and of course students on what we can do."

Fernandez added that the relatively small size of the school playground makes safety a paramount concern.

"This is a very, very small playground compared to other schools," she said. 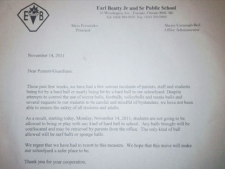