Toronto to send its G20 cleanup bill to Ottawa, but will Harper government pay?

TORONTO - Cleaning up Toronto after the Harper government chose the city to host a summit of world leaders comes with a price tag, and Ottawa should pay it, the city's mayor said Monday.

As the city, which resembled a police state on the weekend, resumed business as usual Monday, Mayor David Miller called on Ottawa to assume financial responsibility for the mess.

"This is a federal responsibility. It's their conference," Miller said.

The mayor did not have a cost estimate of the damage.

Some 700 people were arrested in the wake of Saturday's violence while the Integrated Security Unit said a total of 900 G20-related arrests were made since June 18.

Police cracked down hard on dissent after a roving band of militant protesters ran unimpeded down Queen Street West on Saturday afternoon. Their trail of destruction culminated in police cars burning at several locations, including the city's financial district.

A torrential downpour soaked the crowd but police still held them in the street. The group was released, without charges, after several hours.

Police said they thought protesters in that crowd were planning to use Black Bloc tactics to wreak havoc on the city.

Police were also quick to search and arrest people throughout the city Sunday and break-up apparently peaceful protests.

Protest organizers and civil libertarians decried the tactics, calling them an abuse of police power.

"The massive arrests as we performed this weekend are unconstitutional, they are illegal, they should not have been performed," said Nathalie Des Rosiers of the Canadian Civil Liberties Association.

Police brass say the actions were necessary to prevent another eruption of violence.

And the Ontario government applauded police.

They then change into black clothing and cover their faces in balaclavas or ski masks before fanning out and destroying symbols of capitalism.

The uniform look makes it difficult to identify who smashed windows or spray painted a building. Protesters can change out of the black clothing and go unnoticed in the crowd by police.

After last week's exodus of workers avoiding the downtown core, the streets were full of the usual Monday morning bustle. Glass repair workers could be seen outside a Queen Street bank that had its windows smashed.

The imposing concrete and steel barrier around the summit meeting site -- which earned the city the moniker "Fortress Toronto" -- remained but was slated to come down over a few days.

In the financial district, busy workers rushed past boarded up windows at the Bank of Montreal.

Many people wore blank stares, lost in the contents of their headphones. Others scrolled through their Blackberrys, navigating a tangle of shuffling bodies without looking up.

Caffeine-craved patrons streamed through a Starbucks coffee house, which had its windows smashed out on Saturday. No one seemed to mind the renovations.

Rushing to a morning meeting, Terry Oswald said she expected the chaos.

"It wasn't a total shock, but it was certainly a bit jarring to see that happen in your own city, obviously."

As she waited for a streetcar, Christy Doney said she was surprised the city was so clean despite the graphic scenes she witnessed on the weekend news.

"I didn't think it would get quite to that extreme, but I wasn't expecting it to be peaceful either," she said.

Hydro One employee Jiten Mistry said the images reminded him of the violent mobs he has witnessed in other countries.

"But I guess this happened for the first time in Toronto," he said. "So yeah, it was shocking."

Meanwhile, Jamie Watt said the actions of a few vandals should not tarnish the image of Toronto. 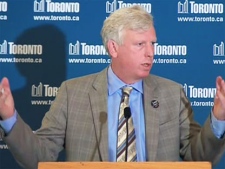 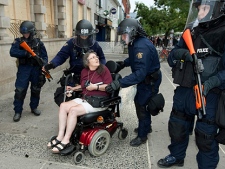 RCMP riot squad officers escort a woman in a wheelchair away from a demonstration at the conclusion of the G20 summit in Toronto on Sunday, June 27, 2010. (THE CANADIAN PRESS/Frank Gunn) 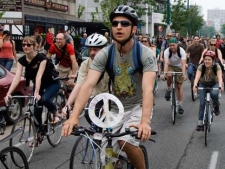