Toronto waterfront marathon takes over the city with thousands of participants

The winners have crossed the finish line as thousands of runners hit the streets for the annual Scotiabank Toronto Waterfront Marathon on Sunday.

The race began at 7:30 a.m. at University Avenue and Adelaide Street with more than 20,000 runners from 40 countries taking part. The finish line for the race is at Nathan Phillips Square.

Defending champion -- Kenyan Kenneth Mungara -- was the first man to cross the finish line in two hours, seven minutes and 58 seconds. A Kenyan also took first place in the women's division with a time of two hours, 22 minutes and 43 seconds.

The event includes a full and half marathon, as well as a five kilometre run and walk.

Participants are trying to raise more than $ 2.5 million for 115 local charities.

The marathon also marks the 2,500th anniversary of the original marathon in 490 A.D.

The race will be challenge for drivers in the city with a series of closures from Queen Street down to the Lake Shore Boulevard, and from Windermere Road in the west to Neville Park in the east.

Stay with CP24 for the very latest on today's marathon, and the resulting road closures. 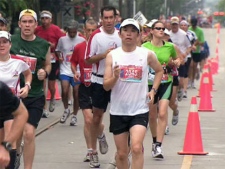 Several downtown streets are shut down Sunday for the annual Scotiabank Waterfront Marathon.