The board has released a survey which finds that when it comes to the economy, 65 per cent of people say they believe the global economic situation is having an major impact on the GTA.

The board is calling on each party to commit to developing a long-term financing strategy for transportation infrastructure expansion among other points. 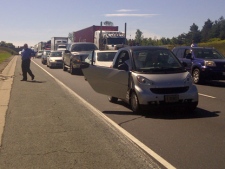 Traffic is backed up for several kilometres on Highway 400, near 11th Line, after a motorcycle crash Friday, Sept. 9, 2011. (CP24/Lindsey Deluce)