TTC makes new effort to reach out to tourists

TTC Chair Karen Stintz will announce the new program as part of Wednesday's regularly-scheduled public meeting of the Commission.

The program is one of the about 70 recommendations made by an advisory panel to improve customer service on the system, TTC spokesperson Brad Ross told CP24.com Tuesday afternoon.

As part of the new program, select downtown subway stations will now have information kiosks and summer student "station ambassadors" to help tourists during the summer months. Information on trip planning, maps and transit delays will be provided.

"It's an initiative to ensure that first-time users and tourists have a positive experience," Ross said. "It's a face-to-face communication beyond the (toll) collector."

Seven stations along the Yonge and University lines will be implemented into the program, Ross said. The program will operate seven days a week, from 9 a.m. to 6 p.m.

Ross says that other station locations will likely be created for one-off events, such as the Taste of the Danforth.

The initiative will start tomorrow and will end around the Labour Day weekend, Ross said.

"We're going to assess it at the conclusion of summer and see what we can do to make it more permanent," he said. 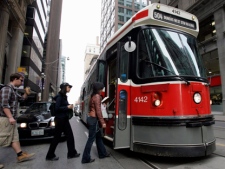 Passengers board a TTC streetcar in downtown Toronto. (THE CANADIAN PRESS/J.P. Moczulski)