The vote was 5-4 and was counted after hours of debate Tuesday afternoon.

"Coming into the meeting I had questions of 'what now' and 'what next.' What's next is we need to find a replacement and 'what now' was not answered," said TTC chair Karen Stintz.

Webster's contract was terminated because of his support of a light-rail transit plan over Mayor Rob Ford's competing vision for transit expansion.

In a statement issued Tuesday evening, Ford said he supported the decision.

"It's time for the organization to look forward," Ford said. "The Commission tells me this. Councillors tell me this. The general public - and subway, streetcar and bus passengers all tell me it's time for change."

Five Ford allies who sit on the TTC board called a special meeting after Webster failed to support the mayor's plan.

The councillors who requested the meeting – Vincent Crisanti, Frank Di Giorgio, Norm Kelly, Denzil Minnan-Wong and Cesar Palacio – represent a majority on the nine-member board and had the ability to oust Webster, whose contract would have run out in July. The city will now have to pay a considerable sum to Webster to buy out the remainder of his contract.

Stintz said she couldn't reveal exactly how much that buyout would cost the city but it has been reported that Webster would have to receive about $500,000.

Councillors on both sides of the debate were vocal during the meeting expressing their dismay with a great deal of emotion.

"I have never seen anything like this in 30 years since I've been elected," Coun. Maria Augimeri said. She voted against firing Webster. "You are kicking success out the door, throwing it away with both hands. What are you thinking?"

Augimeri argued in favour of keeping Webster because of his experience in dealing with transit issues.

"There is an intelligence here. What are we throwing the commission into? We don't have anybody who is readily available (to replace him.)" she said.

Coun. Frank Di Giorgio voted in favour of dismissing Webster. He said it was a necessary step to keep the city moving forward.

Some councillors took to Twitter to express their frustration with the process.

Mike Layton, a rookie on council, tweeted "The decision of five councillors to terminate Gary Webster's contract without just cause undermines the ability for staff to report facts to council."

The controversy has also caught the attention of prominent Torontonians.

Celebrated author Margaret Atwood sent out a tweet shortly after the vote was counted.

"Shameful and costly firing of impeccable Toronto TTC head by Ford junta. They're making a mess and taxpayers will pay," she wrote.

Stintz, who was also adamantly against Webster's dismissal, said getting rid of Webster wouldn't do the TTC any good because it would create instability. Stintz, a city councillor, recently led the way in convincing council to reconsider light-rail expansion as a viable option.

Light-rail transit was an essential part of Transit City, the city's former transportation plan which was scrapped by Ford soon after he was elected mayor.

Di Giorgio suggested on the weekend several TTC managers may be fired for defying the mayor's transit plan. 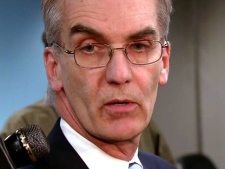