Underdogs have 'nothing to lose' in election

TORONTO - In the eyes of most voters, pundits and naysayers, Adriana Mugnatto-Hamu is one of the underdogs.

The first-time candidate in this May's federal election is in a David vs. Goliath battle that would be better described as Everyone vs. Jack.

Mugnatto-Hamu is one of four longshot candidates taking on NDP leader and incumbent MP Jack Layton in the riding of Toronto-Danforth, where the political heavyweight is all but certain to cruise to an easy victory for the fourth consecutive vote.

Going toe-to-toe with an incumbent is always a challenge. The task is even more daunting when the reigning MP has a star profile that rivals that of Prime Minister Stephen Harper.

So, why are these so-called minnows bothering to invest so much time, energy and money in a short-lived campaign when a landslide defeat is likely?

For Mugnatto-Hamu, a Green Party candidate, she relishes the opportunity to push the agenda of an emerging political party and engage voters on the topic that is most important to her -- climate change.

"At one stage I realized that the threats to my children were far more serious, so I was compelled to run," Mugnatto-Hamu told CP24.com recently as she campaigned for votes at a bustling Pape Station. "I want to change policy and this is one way to change policy."

Her goal is to influence Layton's environmental policies and to play a larger role than people give her credit for.

If Layton sees a groundswell of support for the Green Party in Toronto-Danforth, he may bring his "green" policies in line with those of the Greens, she said.

Because it's no easy feat, Mugnatto-Hamu began campaigning two years ago. As the May 2 vote nears, she is canvassing neighbourhoods and greeting subway commuters daily.

On one particular weekday afternoon at Pape Station, CP24.com joined Mugnatto-Hamu as she handed out pamphlets to anyone who would take one.

"Hi, I'm the candidate for the Green Party," she said repeatedly as post-work commuters rushed by.

Most people accepted her offering, saying thanks or offering brief words of encouragement, as they hurried out of the station.

The odd person rudely declined but some stopped to ask questions about her platform.

Mugnatto-Hamu happily stepped aside to talk to a man about volunteer opportunities.

Despite being a relative unknown in politics, the reception from Toronto-Danforth residents has been "overwhelmingly positive," she said.

Despite this being her first crack at politics, Mugnatto-Hamu -- a stay-at-home mom -- said she isn't deterred by the herculean task in front of her. She said she doesn't see herself as a sacrificial lamb in the game of politics.

She is even leaving the door open for victory, albeit just a crack.

"There is a chance that I could win. Things happen," she said. "If I don't win, I'll keep going."

In addition to giving Canadians a choice at the poll, they bring an assortment of ideas and issues that MPs may choose to ignore.

One type runs for a traditional party – the Tories, Liberals or NDP – in a stronghold held by the opposition.

The second type is perhaps a true underdog. That candidate represents a fringe party or is an independent that runs to deliver a message, despite extremely slim odds.

"It's really a matter of having a strongly-principled position that they want to express," said Drummond.

One example, he said, is the Green Party and its efforts to make the environment a bigger campaign issue and a constant topic of debate in the House of Commons.

The so-called "little guys" share each other's struggles, despite coming from two different strains of underdog.

One of the biggest tests is carrying out a campaign with a shoestring budget and few resources.

Candidates with tighter budgets rely heavily on volunteers, who can be hard to come by, and have less cash to spend on things such as campaign literature or signs.

Giulio Manfrini, the NDP's candidate in York West, said he is feeling the pinch in his uphill battle against longtime Liberal MP Judy Sgro.

"She can pay people to run her campaign," Manfrini said. "I can't. I rely on volunteers."

Getting noticed and being taken seriously is another thing. The spotlight usually shines on candidates representing the "big three" parties or a riding's front-runner, leaving everyone else in the shadows.

Drummond said cash-strapped underdogs should find as much free help and free publicity as they can.

"If you have a message to get out there, having as many volunteers as you can -- because they don't cost anything -- makes it somewhat easier to do," he said.

Candidates should do what they can do distinguish themselves, but without looking foolish, he continued.

Still, he acknowledged it's easier said than done.

"I think they'll find it easier to be ignored," Drummond said.

If there are two types of underdogs, Manfrini falls into the former category that Drummond described.

Representing an established party, Manfrini is trying to unseat Sgro in a riding that has been in the Liberals' hands for decades.

This is Manfrini's second go-round as an underdog, but his odds of defeating Sgro remain just as slim. Since 1999, Sgro has breezed through a byelection and four general elections without much of a challenge, eclipsing the second-place finisher by at least 8,000 votes in each campaign.

Manfrini, a 59-year-old real estate broker, said his second-place finish in 2008 was a welcome surprise.

Manfrini described the drubbing as a humbling experience, but not an embarrassment because the NDP made small gains and leapfrogged the Tories in York West.

With a renewed challenge, Manfrini's ultimate goal is to chip away at the Liberals' hold to one day paint the riding orange.

"To me, the issue is not that you need to run only to win," he said. "You need to run to present your political views and your vision. This will allow me, as a candidate and an organizer, to grow the party's support in our area."

It's a purpose that some people don't understand. Detractors question his involvement because of the narrow odds of victory.

"They say if you're not going to win why do you put your name in?" Manfrini said.

This time around, Manfrini will consider his campaign a success if the NDP makes further gains in York West and more constituents take out an NDP membership.

"You need to grow the base. Otherwise, nothing will change," he said. 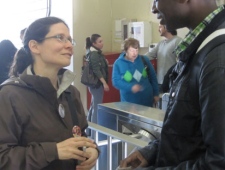 Adriana Mugnatto-Hamu, the Green Party's candidate in Toronto-Danforth, speaks to a man while campaigning for votes at Pape Station recently. Mugnatto-Hamu is in a David vs. Goliath-like battle against the riding's incumbent MP, NDP leader Jack Layton. (CP24/Chris Kitching)