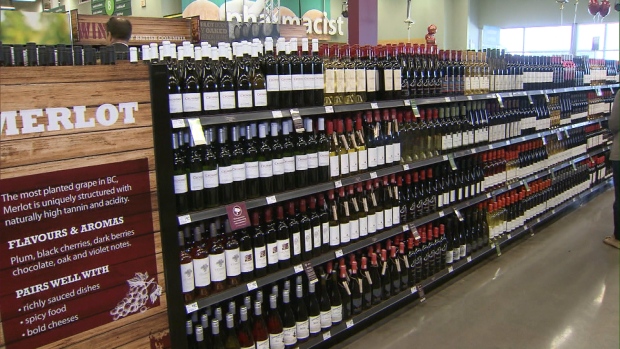 Ontario union workers are protesting the privatization of the LCBO at a rally at Bay and Dundas streets Friday evening.

Members of the Ontario Public Service Employees Union (OPSEU) representing LCBO workers rallied outside the LCBO location at the Atrium on Bay at Dundas and Bay streets at 5 p.m. Organizers said they expected the protest to end by 7 p.m.

The protest comes ahead of the holiday season when alcohol sales in Ontario are close to triple what they usually are in an average month.

In addition to liquor sales rising in December, the Liberal government has recently expanded beer, cider and wine sales throughout the province in 130 grocery stores. The government says that beer and cider will be available in up to 450 grocery stores and 300 of those stores will be selling wine by 2020. As well, the government plans to have private retail wine outlets that are currently operating just outside of grocery stores to be allowed to move inside and use a shared checkout.

Last December, six-packs of beer were put on grocery store shelves. Premier Kathleen Wynne told the Canadian Press that making it more convenient for people to buy beer is all about making life easier for people who lead busy lives.

Wynne said the changes are also about dedicating shelf space to products from small brewers “so that the province’s craft brewers can continue to grow in a fair and efficient beer market.”

But, OPSEU does not agree.

"The large majority of Ontarians oppose privatization of the LCBO, but I don't think everyone realizes that when you start selling wine and six-packs of beer in grocery stores, that is privatization," Denise Davis, OPSEU liquor board employees division chair, said in a news release.

The president of OPSEU Warren Thomas told CP24 at the rally that they have always been against the privatization of the LCBO.

In regards to putting more alcohol on grocery store shelves Thomas said, “We’re saying stop right there, leave it now and then give it a year or two and do a real good study on the negative side effects of increased availability (of alcohol).”

Police are concerned that impaired driving charges are increasing as opposed to decreasing and the more available alcohol is, the more problems there are to go along with it, Thomas said.

Davis is expected to address the crowd at the rally along with Thomas, OPSEU Vice President and Treasurer Eduardo Almeida, and NDP energy critic Peter Tabuns.