Union subway station was evacuated Wednesday night after fast-moving water rushed into the station at about 10:30 p.m. following a water main break.

"The water is rushing into the station onto the mezzanine level and down onto the platform," the TTC's Brad Ross told CP24 at 11 p.m.

"The amount of water is quite heavy. There is a great deal of water so it would make it quite difficult and very unsafe for anyone to use the station."

Ross said he did not know how long it would take to remedy the problem and clean up the station, saying that trains would continue to pass through without stopping until the problem was resolved. Shuttle buses were deployed.

A Twitter user posting on the micro-blogging site at 10:45 p.m. described the flooded station as a "smelly mess," while another said the water "came down the stairs to the subway like a massive waterfall that wouldn't stop."

Several users noted that the TTC did not immediately send out a service interruption email notice, despite recently launching the disruption alert service.

"At transit control they are dealing with the emergency first and notifying customers on the system and then the e-alert will go next," Ross said regarding the alert's delay. "We're still working on protocols for these types of situations."

Subway trains were bypassing the station, which connects to VIA and GO trains and is Toronto's main land transit hub. 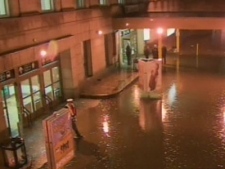 Water is seen flooding the area out side Union Station in Toronto on Wednesday evening, Feb. 11, 2009.