A flight bound for Toronto had to make an emergency landing in Winnipeg on Tuesday night because of an aggressive passenger who tried to light up a smoke, police say.

The Air Canada flight was on its way from Edmonton to Toronto when one of 148 passengers became physically and verbally abusive, airline officials say.

Winnipeg police said a male passenger appeared to be intoxicated and attempted to light a cigarette while the plane was in the air.

A female crew member tried to intervene but the male continued to be aggressive and belligerent, so crew members had to restrain him in his seat to ensure the safety of passengers and staff, police said.

Charges laid by police indicate the suspect threatened others and brought his own alcohol on the plane.

Police officers arrested the passenger after the plane landed in Winnipeg. Afterwards, the plane resumed its journey to Toronto.

Byron Pinksen, 41, of Grande Prairie, Alta., is charged with damaging or interfering with a navigation facility, causing a disturbance, uttering threats to cause death or bodily harm, mischief endangering life, interference with a flight crew member and consuming liquor other than liquor provided by an aircraft operator.

Pinksen remains in custody in Winnipeg. 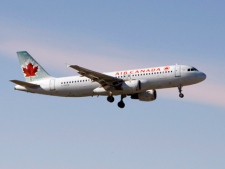